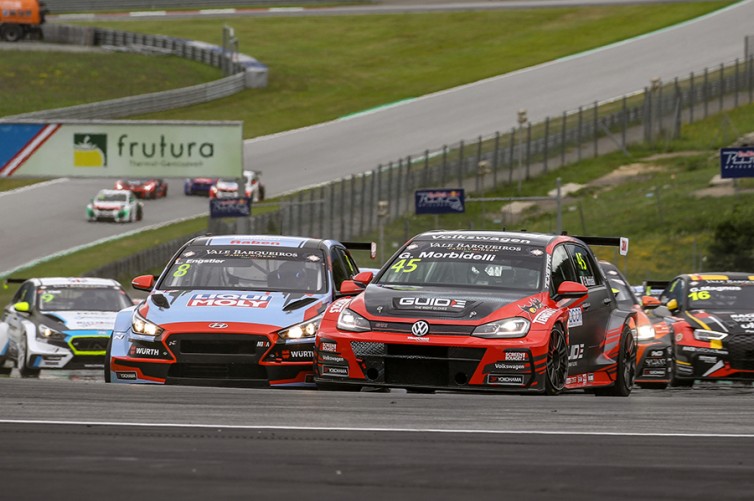 Three weeks after racing in Austria, at the Red Bull Ring, the TCR Europe Series resumes for rounds 9 and 10 in Germany, at Motorsport Arena Oschersleben.
The event provides a great opportunity to Josh Files and Luca Engstler to reinforce their positions on top of the Drivers’ standings, as they both know the track very well.
Files, who’s the current leader in the Target Competition Hyundai i30 N, has scored four victories at Oschersleben between 2016 and 2017, on his way to clinch two consecutive TCR Germany titles. Engstler, who has claimed his maiden TCR Europe win in the Red Bull Ring’s second race at the wheel of a Hyundai run by M1RA, is the home boy and lies second in the standings, 36 points behind Files; he had scored his first TCR Germany podium results at Oschersleben in 2017 and then another third place last year.
However, they will be driving the heaviest car of the field, as the Hyundai will be laden by 80 extra kilos – 20 of BoP ballast + 60 of Compensation Weight – for a total running weight of 1345 kg, 40 kilos more than the second heaviest car the Honda Civic (1305kg).
The running weights of the other cars will be 1285kg for the Volkswagen Golf GTI; 1265kg for the Audi RS 3 LMS and Peugeot 308; 1255 kg for the CUPRA and 1235kg for the Renault Mégane RS.
Other drivers who will be aiming for good results at Oschersleben are Julien Briché (third in the standings, four points behind Engstler) who is eager to make up from a disappointing weekend in Austria, Daniel Lloyd who took a first podium result at the Red Bull Ring in the Brutal Fish Racing Honda, Gianni Morbidelli in the WestCoast Racing Golf GTI who was the winner of both races when the TCR International Series visited Oschersleben in 2017 and Files’ teammate Mat’o Homola who also won at the Motorsport Arena in the 2016 TCR International Series.