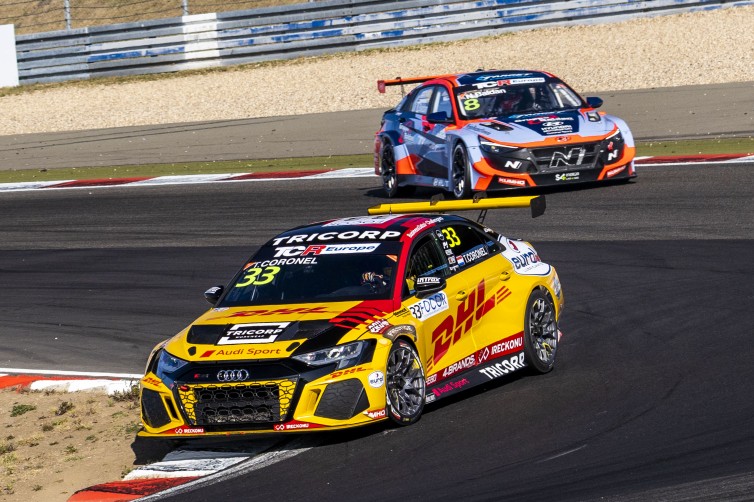 A lights to flag victory for Coronel in rescheduled Race 1

Tom Coronel took his second TCR Europe victory of the season by winning the rescheduled Race 1 at the Nürburgring in his Comtoyou Racing Audi RS 3 LMS. The Target Competition Hyundai Elantra N of Nicola Baldan was second and Championship leader Franco Girolami completed the podium positions in another of the Comtoyou Racing Audi cars.

Pole-sitter Coronel made a good start and led Baldan into Turn 1, while behind the pair, Girolami made a better start from fourth on the grid than Jack Young from P3 and so it was the Argentinian driver who was third as the field streamed through the corner. Both drivers ran wide at the exit to Turn 1 after apparent contacts but remained in the leading group, although when Young again ran wide after trying to avoid contact later on the opening lap, the Halder Motorsport Honda soon dropped to the back of the field and Young would retire due to steering damage he’d suffered during the incidents. Another Lap 1 casualty was the Volcano Motorsport CUPRA Leon Competición of Klim Gavrilov, which pulled up with damage to the right rear wheel.

While gaps were already starting to open up between the top three cars, there was a fight developing for fourth place between two Spanish drivers. Isidro Callejas was fourth in another Volcano Motorsport CUPRA, but he was scrapping with his compatriot Pepe Oriola in the Aggressive Motorsport Italia Hyundai Elantra. Oriola briefly passed Callejas on Lap 2 but the teenager retook the position going into the last corner. Oriola then appeared to ease slightly ahead again on the next lap but there was contact between the pair, which caused Callejas to spin and drop to the back of the field. At least he was able to continue, unlike Michelle Halder, who stopped on Lap 3 which meant both of the Halder Motorsport cars were out of the race.

By Lap 4, there were two great battles developing between four Hyundai Elantra cars for fourth to eighth places. Oriola was being attacked by Felice Jelmini in a Target Competition car while Jelmini’s teammate Josh Files was defending sixth place from a determined Jáchym Galáš in the HYUNDAI | Janík Motorsport car and the battles between the four would rage for much of the race. Giacomo Ghermandi and TCR Europe debutant Jonas Karklys, meanwhile, were given drive-through penalties for jump starts.

On Lap 5, the Comtoyou Racing Audi of Marco Butti passed John Filippi’s Sébastein Loeb Racing – Bardahl Team CUPRA for P8 and the 17-year-old Italian then began to close the gap on the four-way battles ahead. There was slight contact between Oriola and Jelmini on Lap 6, while Galáš tried to go around the outside of Files into Turn 1 on Lap 8, but Files defended the position. There was then contact between the pair two laps later, which forced Files onto the grass. By now, Butti had closed right up on the pair.

Giacomo Ghermandi and Mat’o Homola both joined the growing list of retirements, although Evgenii Leonov had a narrow escape on Lap 12 when he seemingly out-braked himself and ran off track, allowing his young teammate Isidro Callejas into the top ten.

With Coronel over two seconds ahead of Baldan and Girolami seemingly content to cruise home in third place, it was almost inevitable that the battles between the four Hyundai cars would provide some late drama. On the final lap, and out of sight of the television cameras, Jelmini dropped a place and so Files was able to finish fifth behind Oriola.

The result means Girolami has extended his lead over Files in the Drivers’ Championship to 78 points, with Coronel’s win lifting him back into third place in the standings, a further 13 points behind. But with four races remaining, a total of 192 points are still available.

The next TCR Europe races will be at the season’s penultimate event at the Autodromo Nazionale Monza over the weekend of September 24th/25th.