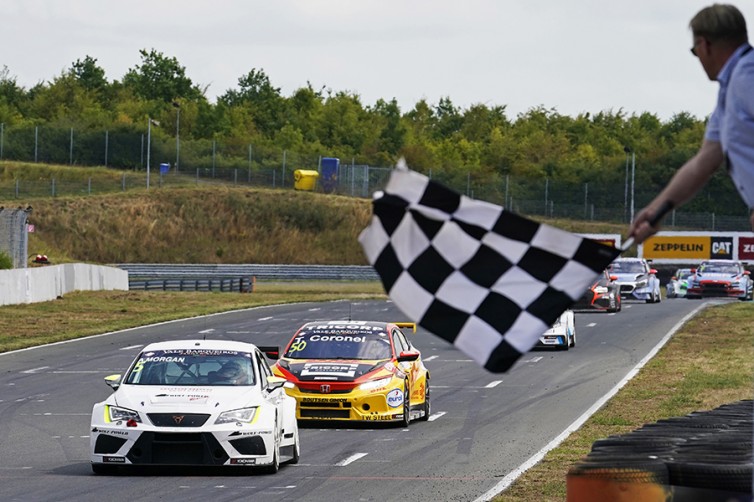 Wolf-Power Racing’s Alex Morgan snatched his maiden TCR Europe victory in the second race at Oschersleben. The Briton led for the whole distance and managed to reject all overtaking attempts from Tom Coronel; eventually he won by a margin of only three tenths, giving CUPRA its first win of the season. Coronel encored his second place of Race 1, while Josh Files completed the podium with another third place. This meant that he further stretched his leadership in the standing to a comfortable 78 points over Luca Engstler who has moved back into the second place. The young German started from 12th on the grid and recovered to finish seventh, although is still under investigation for making contact with Nelson Panciatici.
Julien Briché, still placed third in the standings ten points behind Engstler, battled with his Peugeot fellow drivers Aurélien Comte and Jimmy Clairet and eventually was classified 14th.
Touring Car rookie Dominik Baumann confirmed the excellent impression given in yesterday’s race and played once again the perfect teammate to Files, protecting his shoulders and finishing in fourth position.
The TCR Europe Series will resume after the summer break at Barcelona on 20/22 September.

Key facts
Start – Morgan sprints from the pole while Coronel from third on the grid pips Files at the start; Baumann and J. Bäckman follow in fourth and fifth
Lap 1 – Filippi and Morbidelli go wide at T3 and lose some places
Lap 2 – Panciatici and Engstler moved up to seventh and eighth ahead of Lloyd and Potty
Lap 3 – A. Bäckman overtakes Magnus for 10th; Filippi passes Homola for 12th
Lap 4 – Engstler passes Panciatici for seventh after making contact; Lloyd overtakes Panciatici for eighth
Lap 5 – Coronel is closely chasing Morgan; Files follows in third position, his shoulders guarded by Baumann and J. Bäckman; Potty spins after making contact with Homola
Lap 6 – Homola pulls over and stops at the pit entrance with electrical bugs
Lap 7 – Lloyd stops and retires with a possible turbo failure
Lap 8 – Urrutia overtakes J. Bäckman for fifth
Lap 9 – Morbidelli stops with a blown front tyre
Lap 11 – Bihel, Comte, Kajaia and J. Clairet fight for the positions between 12th and 15th
Lap 12 – Morgan has a 0.2-second margin over Coronel
Lap 13 – Briché overtakes J. Clairet for 15th
Lap 14 – Kajaia stops along the track
Lap 15 – Morgan is able to build a small gap ahead of Coronel
Lap 16 – Morgan keeps Coronel at bay and wins; Files is third from Baumann and Urrutia