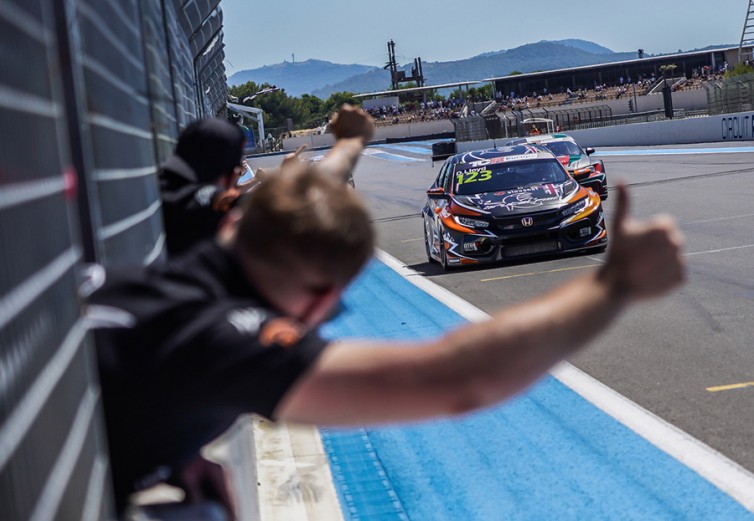 An authoritative victory for Lloyd at Paul Ricard

Daniel Lloyd began his TCR Europe campaign in the best possible way, claiming an authoritative victory in the series’ opening race at Circuit Paul Ricard.
Lloyd took a perfect start from P3 on the grid and managed to enter into Turn 1 ahead of pole sitter John Filippi and second-placed Mehdi Bennani.
From that moment on, the Briton drove his Brutal Fish Racing Team Honda Civic in front of the field, doing his best to keep at bay his pursuers, with Bennani who had passed Filippi for P2 during the first lap.
Lloyd put in a great defense and never opened the lesser gap, then, eventually, he was able to build a small gap in the two latest laps and so took the chequered flag four tenths ahead of Bennani, while Filippi completed the podium.
Behind them, Teddy Clairet moved into P4, overtaking Néstor Girolami in the early stages; the Argentine retained the fifth position until the end, resisting to the assaults from Jimmy Clairet.
Pepe Oriola made a super start, climbing from 13th on the grid to seventh at the end of lap 2; the Spaniard was then involved in a thrilling fight with the Bäckmans. Him and Jessica made contact a couple of times, which resulted in the bonnet of Oriola’s Honda flapping half-opened. Andreas managed to pass Oriola on lap 7, and soon afterwards Pepe and Jessica clashed again on the main straight and both retired.
Behind Andreas Bäckman, Sami Taoufik, Mat’o Homola and Mike Halder rounded off the top-ten, with the latter recovering after a spectacular spin in lap 4 that had cost him several places.
Other drivers who retired where Martin Ryba in lap 1, following an incident with another car, Tom Coronel with a broken suspension and Nicolas Baert with a possible steering issue, both in lap 6.
Race 1 is scheduled to start tomorrow at 12:15 CEST; live streaming at www.tcr-series.com.