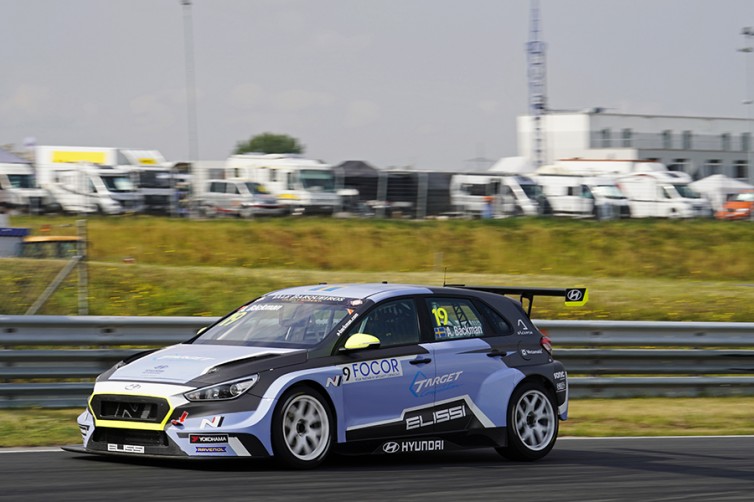 Andreas Bäckman is in a league of his own

Andreas Bäckman claimed his maiden pole position in TCR Europe and did it in an impressive way. The Swedish driver set the fastest lap in both, Q1 and Q2, leaving the rest of the field far behind. Daniel Lloyd and Santiago Urrutia qualified in second and third position respectively, but with gaps of three and four tenths from the pole sitter.
None of those who are filling the top positions in the standings was especially impressive. Josh Files, the current leader, settled in a ninth position that will grant him a spot on the front row of the top-ten reversed grid for Sunday’s Race 2 alongside Alex Morgan who will sat on pole position. Luca Engstler barely advanced to Q2, but then was nailed in the pits with a technical issue and qualified 11th. Julien Briché was far off the pace and qualified in a disappointing 22nd position.
Race 1 will start this afternoon at 13:40; live streaming at www.tcr-series.comand www.tcr-series.tv.

Q1 – Andreas Bäckman outpaces the field
Andreas Bäckman clocked an impressive 1:30.078 in the late stages of Q1, inflicting a gap of six tenths to the rest of the field.
Before the Swede’s fastest lap, the session had been quite close, with five other drivers taking turns on top of the timesheet. Gilles Magnus was the first to break the 1:30 wall posting a provisional fastest lap of 1:30.901; he was beaten by Tom Coronel’s 1:30.873 then Lloyd improved to 1:30.868, but Urrutia managed to be one thousandth of a second faster in 1:30.867. Magnus regained the lead with the time of 1:30.770, then it was Lloyd again to be provisionally fastest in 1:30.693 and finally Gianni Morbidelli improved further to 1:30.680. But eventually Andreas Bäckman annihilated the field with his fastest lap of 1:30.078. Just before the end, Nelson Panciatici moved into the second place with a lap of 1:30.674. Dominik Baumann was fifth fastest on his maiden appearance in the series and Jessica Bäckman claimed the final spot for Q2.
The following drivers advanced to Q2: A. Bäckman, Panciatici, Morbidelli, Lloyd, Baumann, Magnus, Morgan, Urrutia, Coronel, Files, Engstler, J. Bäckman.
Amongst those who didn’t make the cut were Homola (13th), Comte (16th), Potty (19th) and Briché (22nd).

Q2 – Andreas Bäckman encores and beats Lloyd
Andreas Bäckman made clear he wanted the pole with a provisional fastest time of 1:30.334 on his first lap out, beating Lloyd’s 1:30.514, while Urrutia and Panciatici set the same time of 1:30.612. Alex Morgan (drive shaft) and Tom Coronel (power train) pulled over, while Morbidelli (radiator) and Engstler (steering rack) sat in the pits and could not post a valid lap time.
Andreas Bäckman set the matter with another faster lap of 1:30.017; Urrutia (1:30.407) and Panciatici (1:30.503) improved as well moving up into second and third respectively, but then Lloyd posted the second fastest lap of 1:30.350, demoting them by one place.