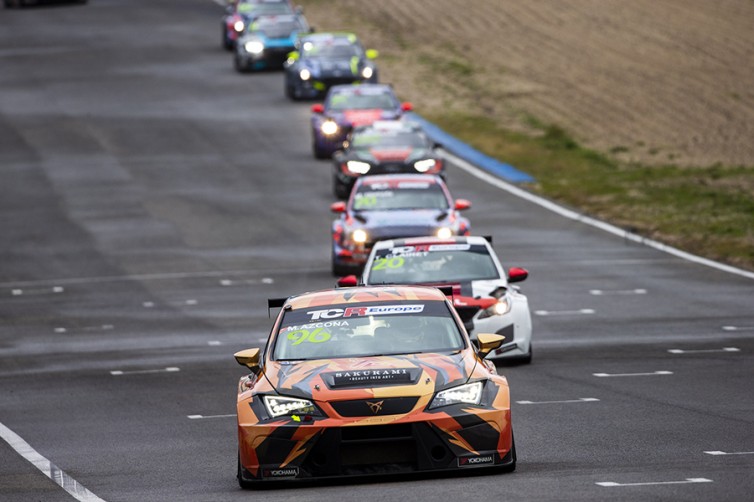 Mikel Azcona scored his third consecutive victory from three races in TCR Europe, while there was drama as far as the title fight is concerned. The championship leader Mike Halder eliminated himself with a costly mistake, and so Mehdi Bennani jumped into P1 of the standings.
With just today’s second race to go, four drivers are still in contention for the champions’ crown, but with 40 points on offer, it’s quite likely that this will turn into a two-way battle between Bennani and Halder who are split by 8 points. Nicolas Baert and John Filippi have now gaps of 30 and 33 points respectively, meaning that their hopes are now very slim.
The track was still damp when the race started and Azcona made good use of the pole to lead from Teddy Clairet, Mat’o Homola, Bennani, Julien Briché, Andreas Bäckman, Baert and Dániel Nagy. Mike Halder and Daniel Lloyd managed to recover several position and moved up into 10th and 12th respectively, but during the first lap there were incidents: Tom Coronel went wide after being hit by Evgenii Leonov; Martin Ryba retired after contact with another car and then Jessica Bäckman lost control, cut a corner on the grass and t-boned Pepe Oriola’s car. The safety car was deployed while both drivers were rescued and the Spaniard was sent to the hospital for medical checks as he suffered from pains to the ribs.
Racing resumed in lap 7, but two laps later the safety car got back to the track after Mike Halder outbraked himself at T1 and collected Franco Girolami; that was the end of the race for both Honda drivers.
The race restarted with five laps to go. Azcona controlled the situation and the positions behind him did not change with Teddy Clairet and Homola completing the podium ahead of Bennani, Briché and Andreas Bäckman.
In lap 13, Nagy overtook Baert for P7, stealing three previous points from him, while Daniel Lloyd won the battle for ninth ahead of Sami Taoufik and Filippi. However, this did not prevent the Briton from falling off the title fight.
Race 2 is scheduled to start at 15:00 CE; live streaming is at www.tcr-series.com.