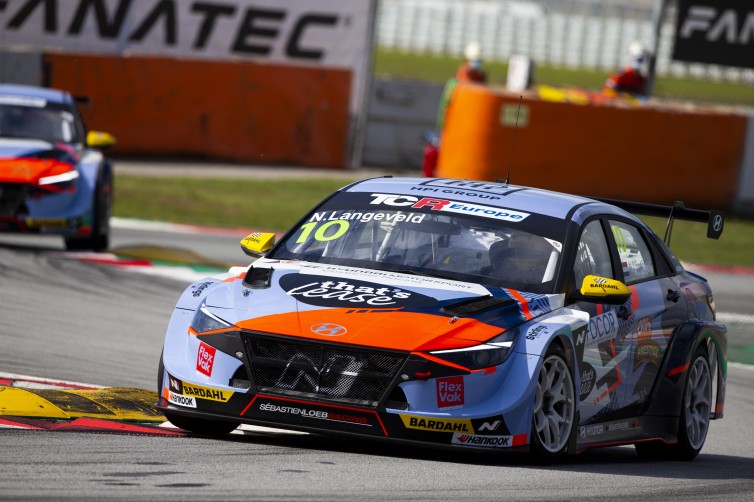 The Sébastien Loeb Racing Hyundai Elantra N of Niels Langeveld was fastest in the first Free Practice session in Barcelona, with the Dutch driver’s best lap over six-tenths quicker than that of second-fastest Franco Girolami in a PSS Racing Honda Civic Type-R. The Brutal Fish Racing Honda of Martin Ryba was third quickest.

First to set competitive lap times during the thirty-minute session were Langeveld’s two teammates Mehdi Bennani (1:57.127) and Sami Taoufik (1:57.386) with both Moroccan drivers improving on their next laps. The Peugeot 308 of Teddy Clairet then went fastest with a lap of 1:56.364 while his brother Jimmy was fourth quickest (1:56.925) in the other Team Clairet Sport Peugeot. Girolami then went P5 with a 1:57.071.

Both Clairet brothers and Taoufik then improved their best times again before first Girolami set a 1:56.599 to go P3, then Langeveld went exactly two-tenths faster to go P2 and Taoufik then re-took P3 with a lap of 1:56.433. With around eighteen minutes of the session remaining, Langeveld went fastest with a 1:55.411 and three minutes later, the two Brutal Fish Racing Honda Civic cars of Jack Young (1:56.399) and Isidro Callejas (1:56.567) went P3 and P5 respectively.

With a little under eight minutes to go, the Comtoyou Racing Audi RS 3 LMS of Nicolas Baert went fifth quickest with a time of 1:56.521 before Martin Ryba (1:56.284) went P2 around four minutes later. With just over two minutes remaining, Girolami’s last quick lap netted him P2 (1:56.016) while his teammate Viktor Davidovski went fifth fastest with a lap time of 1:56.375.

Nobody could beat Langeveld’s time, however, with the Hyundai driver the only man to beat the 1:56 barrier during the session. Although out of the battle for the Drivers’ title, Langeveld can still beat his compatriot Tom Coronel to finish third in the overall standings and so setting the fastest time in FP1 was clearly a confidence boost after a disappointing performance in Monza two weeks ago.

Niels Langeveld (fastest): “We have only two Free Practice sessions, so to be there in the beginning is very important; there is a Dutch saying that doesn’t really translate into English but it means something like ‘the first hit is really strong’. I definitely had no idea where I would be today in Barcelona compared to Monza. If I look at Monza, I was P16 and P20 and that’s definitely not the place where I should be because I know the team, the car and I are all much better than that. It seems that we are struggling when there is weight in the car and the reduction in power also didn’t help, especially in Monza. Here there are a lot more twisty corners and the strong front end of the Hyundai really helps us here. From the first moment I left the pit lane, I felt the balance was there and we were on the right track. From my feeling, we are almost there but we still need to improve a little bit in the other Free Practice.”

Free Practice 2 is scheduled to start at 16.20 CEST. Live timing will be available via the TCR Portal tcr-series.tv