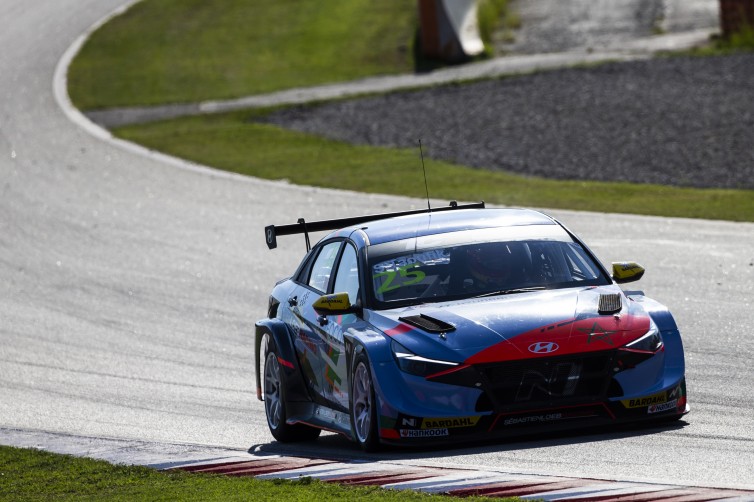 After Niels Langeveld set the fastest time in Free Practice 1, it was the turn of his young teammate Sami Taoufik to go quickest in FP2 – the first time the 19-year old had topped a TCR Europe session this season. The Hyundai finished the half-hour session a little under three-tenths ahead of the Volcano Motorsport CUPRA Leon Competición of Klim Gavrilov, who’d made changes to the setup of his new car after finishing FP1 in eighteenth place.

In a taste of what was to come, it was Taoufik who was the early pace-setter, recording a time of 1:57.526 on his first competitive lap, a little over half a second ahead of the Peugeot 308 of Jimmy Clairet. The next lap then saw Brutal Fish’s Jack Young, the RC2 Junior Team’s Sergio López and the two PSS Racing Honda cars of Franco Girolami and Viktor Davidovski set top-four times before Langeveld set a 1:55.839 to go fastest. López and Langeveld both improved their times, while Martin Ryba went P3 with a 1:56.281.

With Mikel Azcona on WTCR duties in the Czech Republic and expected to travel to Barcelona tonight, it was left to Evgenii Leonov and Klim Gavrilov to uphold the honours of the Volcano Motorsport team and they didn’t disappoint, with both inside the top six. Just under halfway through the session, Taoufik went quickest with a lap of 1:55.333, which he swiftly bettered with a 1:55.118 to lie in P1 ahead of Jimmy Clairet (1:55.515).

Leonov then improved to P4 (1:55.957), only to be pipped by Mehdi Bennani (1:55.893) before the last eight minutes of the session saw a flurry of quick times. Isidro Callejas (1:55.642), Gavrilov (1:55.404) and Girolami (1:55.451) all set top-three times, with Langeveld improving his best lap to a 1:55.540, although that was only good enough for P5. Then, with less than three minutes to go, Nicolas Baert went P4 with a 1:55.512, pipping Jimmy Clairet’s best lap by just three-thousandths of a second. Comtoyou’s Dušan Borkovič was forced to sit out the session with a gearbox issue, while Mat’o Homola and Sylvain Pussier were both shown warning flags for repeatedly infringing track limits at Turn 15.

But for the second time today, the fastest time was set by a Sébastien Loeb Racing Hyundai Elantra N, with a clearly delighted Sami Taoufik encouraged by the improvement in the car after two disappointing weekends in Italy and Belgium.

Sami Taoufik (fastest): “That was nice, I enjoyed myself. I’m out of breath because I was screaming all the way in! It means a lot to be P1 – especially here, because I was born in Catalunya. My father is British and my mother is Moroccan, which is why I’m bilingual. It’s been difficult for my parents to fund my racing so this is definitely going to put a smile on their faces to see me up there fighting with the champions. We had some issues at the previous races in Monza and Spa, particularly with the BoP and the changes this year that mean we can’t use the engine to its full potential, so I’m really happy to see two of the team’s drivers going P1 in Free Practice and showing what we’ve got. Tomorrow I’ll be looking for P1 again; it’s easy, right? I’ve done it now so I can do it again, that’s what I’m hoping.”

Qualifying is scheduled to start at 10.40 CEST tomorrow, with Race 1 at 15.40. Live timing will be available via the TCR Portal tcr-series.tv and Race 1 will be streamed live on the TCR Portal and the TCR Europe social media channels