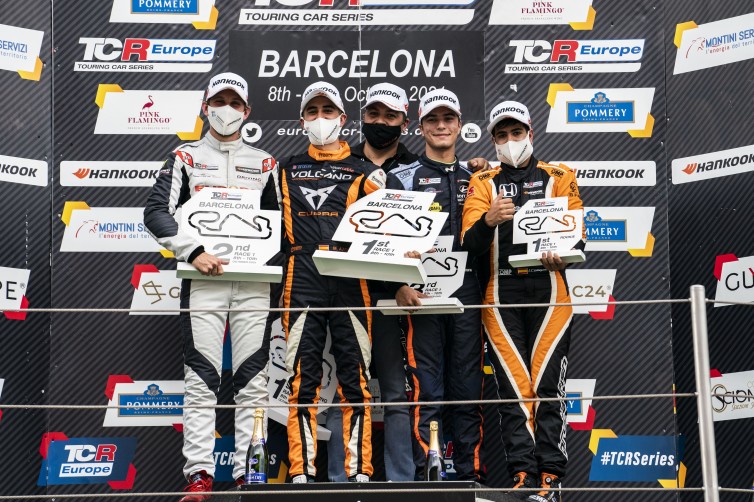 Barcelona Race 1: Quotes from the podium

Mikel Azcona (1st) “I have to say it was not a difficult race because I had a comfortable gap between Clairet and me. Over the first few laps he was pushing quite strongly, and I thought I had to push to avoid getting into a battle with him. Then I saw in the mirror that he was a second or so behind me, so I said to myself that if I stay like this I can win the race and the title. No mistakes, no kerbs, no issues – I tried to save the car. I have to say that I am very happy to be the European champion for a second time. Thanks to my team, Volcano Motorsport, to CUPRA Racing and to everyone that supports me; I really appreciate them. Of course, it means a lot to me to be able to win the title at home. I have my family, my girlfriend, my brother and my sponsors here and it feels really good to have the atmosphere at my home track to have everybody supporting me. Tonight we will have a really good dinner with my WTCR team to celebrate, but we also have to focus on two important WTCR races tomorrow.”

Teddy Clairet (2nd): “The start was a bit strange, I have to say, because it seemed to be really quick between the five-second board and the lights going out, but okay I made a better start than Sami so I could overtake him. It was a good point for me because I knew Azcona was faster, but if I could stay with him I could maybe open a gap to the cars behind and that was what happened. Sami was fast until lap four or five and then I could open a gap until the chequered flag. I thought Azcona would take the restart quite soon and when we were in the chicane I said to myself that we would go at the last moment so I had to concentrate. It was important to follow him because it’s always a tricky moment and you can easily lose a position or two because everyone is so close. It was a key moment, I think, and then I was really happy because the car was really good and the team worked well. We will see tomorrow what will happen in Race 2.”

Sami Taoufik (3rd): “I’m happy to finish on the podium; it’s nice to be up there to show my flag and get support from my family – there were lots of smiles around the team as well. The main issue was at the start; I had a really good start relative to Azcona, but when I tried to upshift it missed a gear and so I did a double upshift and left that left me at the mercy of Clairet. Overall, it was a difficult race, quite boring in my opinion, related to tyre management. There were barely any overtakes in the race, including myself. I hope tomorrow I can make up some positions. Obviously it’s the reversed grid and I start from P9, so there’s definitely a lot to do. If I am going to make up positions, it’ll have to be in the first few corners because we’re going to have the same issues as today with tyre management. In the last race in Monza I went from P14 to P4 so nothing’s impossible. I hope to find some gaps tomorrow for me to stick my nose in.”