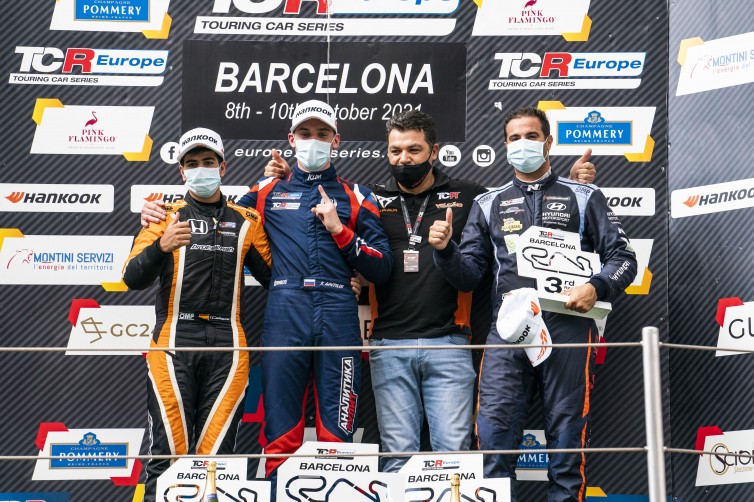 Barcelona Race 2: Quotes from the podium

Klim Gavrilov (1st): “It was actually really hard for me to move from the Audi to the CUPRA, mainly for one simple reason – I’m too tall for the CUPRA! I didn’t have enough space for my legs so we were adjusting the pedals all weekend, but it worked pretty well and I was quite comfortable in the car. In the first race maybe we didn’t completely make the right decisions for the setup so I didn’t have the best space and then we worked all night to try to understand what we needed to change, like the tyre pressures we needed for the race, but everything we did worked pretty well. There was a lot of pressure from Jack Young at the start of the race because I was still trying to work out the setup, like how hard to push the brakes to make it slide a little and how much speed I could carry through the corners. Comparing the two cars, I think the Audi was pretty good in the corners but it suffered a little on the straights, while the CUPRA is maybe a little faster on the straights and so it’s easier to overtake and easier to defend.”

Isidro Callejas (2nd): “It was so difficult, we had maybe the pace we had in yesterday’s race. I think I had an extra push because of the support from the fans at my home race – it was incredible – and so I was able to keep pushing and resist the pressure. I think the guys behind had the pace but maybe not enough to overtake, as the gap stayed at two or three tenths. I had 40 kilos of ballast this weekend, but the pace in yesterday’s race was incredible but I still don’t have the experience. I had a super season – I didn’t expect at the start of the season that I would get two podiums and a pole position, so for me it was just wow!”

Mehdi Bennani (3rd): “Every time it’s good to come back to the podium. We had a good setup for the races and I was able to fight and have some fun. Also with my teammate Sami it was good to fight together for a podium, so it was an enjoyable race. There was no chance to overtake; I don’t know why, but we didn’t have the speed to overtake. Every time we had a better exit but there was no chance; I would have had to take some big risks and in the final race of the season there was no need. It was a nice experience this year and we saw a lot that Morocco is there. I’m really happy because the future is coming; it would be good to have a Morocco Junior Team – we are working on it and if it happens it’ll be very, very nice.”