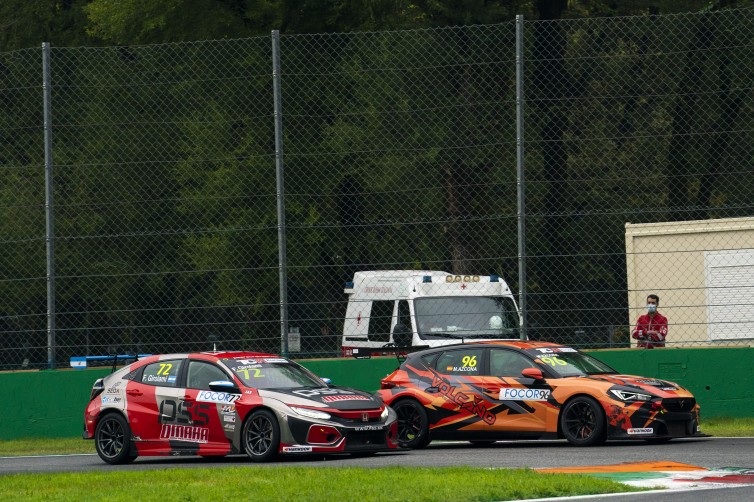 The Circuit de Barcelona-Catalunya will host the final two TCR Europe races of the 2021 season this weekend, with the Spanish track set to witness a thrilling finale to the fourteen-round championship. Only one of the TCR Europe titles has been settled and so, just as in the previous three seasons, the majority of the various championships will go down to the wire on the final weekend.

Unsurprisingly, most attention will focus on the battle for the Drivers’ title, with Mikel Azcona and Franco Girolami going head-to-head for the crown. The pair are separated by 53 points – effectively 60, as Girolami has to drop his lowest score of 7 points – but 90 points are still on offer from Qualifying and the two races. Third-placed Tom Coronel is 127 points behind Azcona and so the title fight is very much a two-way affair, although Coronel could be beaten to third place by his compatriot Niels Langeveld who is just 13 points behind.

In the Teams’ fight, Sébastien Loeb Racing are 83 points clear of Comtoyou Racing and so it will take a major upset to prevent the French team from winning the title with its four Hyundai Elantra N cars, including those of Langeveld and the reigning TCR Europe champion Mehdi Bennani.

In the various Classes, the Rookie title has already been decided; 17-year old Isidro Callejas is 83 points ahead of his nearest rival Jáchym Galáš with a maximum of 50 points potentially on offer from the final two races. The other two battles are far from settled, however, with Viktor Davidovski and Martin Ryba separated by just 11 points in the Diamond class and the top three Junior drivers – Nicolas Baert, Sami Taoufik and Jack Young – within 25 points of each other.

The weekend also has the potential to see some TCR ‘commuting’ going on. Thanks to a last-minute change to the WTCR – FIA World Touring Car Cup calendar, both Azcona and Coronel are due to be at Most in the Czech Republic as well as in Barcelona. They will take part in the WTCR Practice and Qualifying sessions on Friday before flying to Barcelona to compete in TCR Europe Qualifying and Race 1 on Saturday. Then, depending on their results, the pair will dash to the airport on Saturday evening to compete for their respective WTCR teams on Sunday.

The entry list for the Barcelona event consists of twenty-four drivers, with the RC2 Junior Team returning after their maiden appearance at Monza to race at their home track. The Spanish team will again run two CUPRA Leon Competición cars for Sergio López and Felipe Fernández, who takes over the car his older brother Rubén raced at Monza. Another addition is TCR Eastern Europe entrant Giacomo Ghermandi, who will make his TCR Europe debut at the wheel of a LEMA Racing CUPRA Leon Competición. In addition, Russia’s Klim Gavrilov will switch from his VRC-Team Audi RS 3 LMS to a Volcano Motorsport CUPRA to learn more about the car ahead of a possible 2022 campaign with the Spanish team.