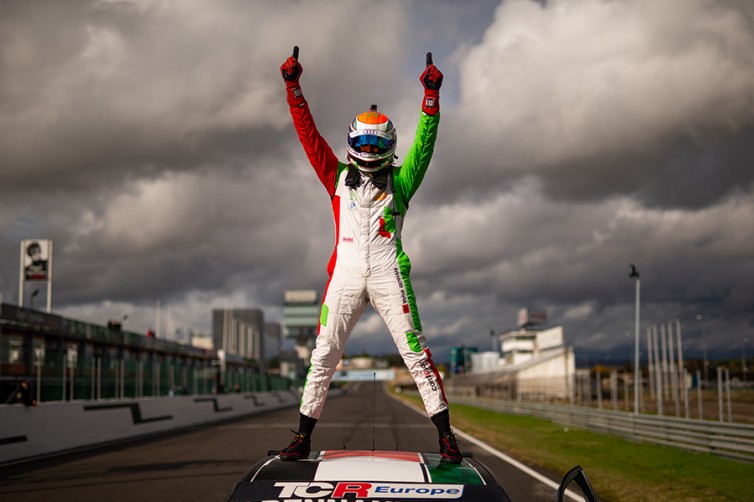 Bennani is champion, as Filippi claims his maiden win

Mehdi Bennani secured the TCR Europe title with a second place in Jarama’s Race 2, in which John Filippi claimed his maiden win in the championship that meant he finished runner up in the standings.
It was a race full of drama, that saw Mike Halder’s hopes to strike back after the mistake that had put him out of Race 1, vanishing when he crashed from 10th; and so Bennani sailed towards the title at the wheel of his Audi RS 3 LMS. It was a success of consistency, as the Moroccan hasn’t scored any race win during the season and finished only three times on the podium. It was also the day of triumph for Comtoyou Racing that ended the season with a hat trick, having already claimed the Teams’ title after Race 1 and adding Nicolas Baert’s victory in the Yokohama Trophy as the icing on the cake.
At the start, Filippi sprinted from the pole to take the lead from Dániel Nagy, Bennani, Andreas Bäckman, Julien Briché, Baert, Mikel Azcona and Teddy Clairet. At the end of lap 1, Michelle Halder was given a drive-through for jump-start, while her brother Mike had already climbed to P11. Soon, Azcona and Teddy Clairet overtook Baert, moving up into sixth and seventh respectively.
Filippi took advantage from the battles behind and built a gap, while Nagy was trying his best to keep Bennani at bay. The fight for P2 became red hot, with Nagy chased by Bennani, Bäckman, Briché and Azcona. In lap 4, Azcona and Briché made contact and the Spaniard moved into P5, but then Mike Halder crashed, and the safety car was deployed.
Racing resumed in lap 8, and Briché passed Azcona for P5, while Bäckman was threatening Bennani’s third place. Briché continued his charge and passed Bäckman for fourth, while Azcona made a mistake and dropped from sixth to eighth.
Briché advanced two more places, as he passed Bennani for P3 in lap 11 and Nagy for P2 in lap 12, but he was overdriving and nearly lost control of his car. Bennani seized the opportunity and passed both Nagy and Briché, moving into second.
With Filippi well ahead and Bennani safe in second position, the fight for the last place on the podium saw Azcona moving into P4 ahead of Bäckman, while Nagy crashed in lap 15, which prompted the safety car back into action.
The race resumed for the final two laps, Filippi and Bennani finished first and second, with Briché managing to keep Azcona at bay for the third position. Baert provided the last thrill as he passed Bäckman for P5, which gave him the third position in the final standings behind Bennani and Filippi and ahead of Mike Halder.