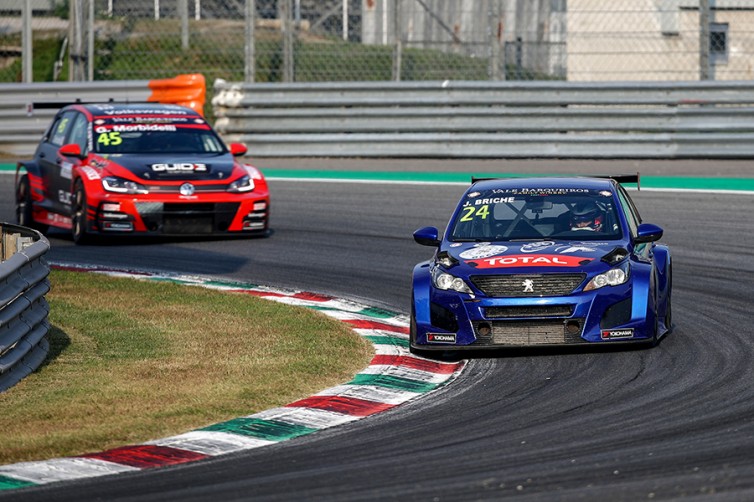 Julien Briché and Aurélien Comte topped the TCR Europe Qualifying in the final event at Monza in what was a quite surprising result after the domination of Hyundai cars in Friday’s Practice.
Eventually only two Hyundai i30 N cars made it to the top-twelve for Q2, the championship leader Josh Files’ and Andreas Bäckman’s. All the others were eliminated in Q1, including that of Luca Engstler who had been the fastest in Practice.
Briché and Conte played a well organised slipstreaming game, with the latter towing Briché who still has the possibility to prevent Files from being crowned champion. For the time being, the pole enabled Briché to reduce his gap in the standings from 48 to 43 points, with 80 to be awarded in the two races. However, with the ninth fastest time in Q2 Files secured a front row spot on the starting grid for tomorrow’s Race 2 alongside the pole sitter Maxime Potty.
Santiago Urrutia and TCR Russia’s guest driver Klim Gavrilov qualified in third and fourth at the wheel of their Audi cars, while Teddy Clairet completed a great result for Peugeot with the fifth fastest lap.
Race 1 will start this afternoon at 16:50 local time (CET); live streaming at www.tcr-series.comand www.tcr-series.tv.

Q1 – Engstler and Homola don’t make the cut for Q2
Briché and Comte made clear from the very start that they were aiming for the pole and posted the first provisional fastest laps of 1:57.642 and 1:57.326 respectively.
After a brief red flag period for recovering the Renault Mégane of Guilherme Salas from the gravel trap of the Roggia chicane, Briché improved to 1:56.547 that would remain the fastest lap of this part of the session. Comte (1:56.732) moved into second, with John Filippi (1:57.135) third fastest ahead of Urrutia (1:57.358) and Gavrilov (1:57.371).
The top-twelve were rounded off by T. Clairet, Files, Gilles Magnus, Gianni Morbidelli, A. Bäckman, Potty and Daniel Lloyd.
Jimmy Clairet was the first who did not make the cut, 52 thousandths behind Lloyd, while Engstler, Mato Homola and Nelson Panciatici ranked in 17th, 18th and 21st positions and were not able to explain the drop in performance of the Hyundai cars.

Q2 – The Briché-Comte express tops the timesheet
A. Bäckman and Files ran together for clocking quick times, but the Comte-Briché duo was more effective and the two Frenchmen posted laps of 1:56.754 and 1:56.308 respectively that would not be beaten. Urrutia (1:57.132) moved into third ahead of T. Clairet (1:57.373), but the latter was eventually demoted to fifth when Gavrilov was clocked at 1:57.241.
Files and Bäckman ranked ninth and tenth for most of the ten-minute segment, but Magnus’ and Potty’s improvements meant that Bäckman slipped down to 12th just before he had to stop with a broken driveshaft.