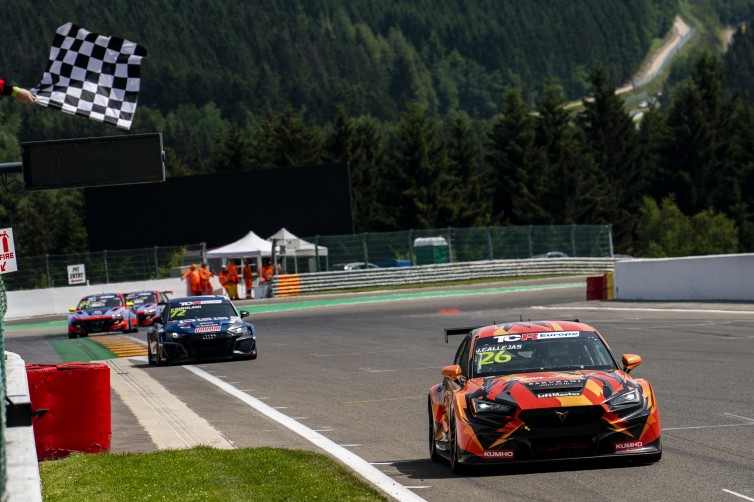 Callejas makes TCR history with a last-minute victory at Spa

Isidro Callejas, driving a Volcano Motorsport CUPRA Leon Competición, became the youngest-ever TCR Europe race winner when he took a last-gasp victory in Race 1 at Spa-Francorchamps in Belgium. Callejas, who celebrates his eighteenth birthday next week, only snatched the lead on the final lap and held off pole-sitter Franco Girolami to become the fifth different race winner from the five different TCR Europe races held so far this season.

At the start, Girolami was first to Turn 1, the right-hand hairpin at La Source, but behind the Comtoyou Audi, Nicola Baldan tried to go around the outside and briefly moved into second place past Klim Gavrilov and Callejas, but Baldan’s Target Competition teammate Josh Files’ decision to dive up the inside was more successful and so the English driver moved from P6 on the grid to P3 behind Callejas in a few hundred metres. Not so fortunate was Pepe Oriola, whose Brutal Fish Racing Honda made contact with the Hyundai Elantra N of Mat’o Homola coming out of La Source and the Spanish driver was forced to limp back to the pits. A similar fate befell his teammate Martin Ryba, who had several contacts on the opening lap before a heavy contact with the Audi of Ruben Fernandez at Les Combes left the RC2 Junior Team car stranded and the Safety Car was called into action while it was recovered.

When racing resumed on Lap 4, Felice Jelmini appeared to lock his brakes on the run down to Turn 1 and dropped three places as a result, although Jelmini quickly recovered one of those places when he passed the Halder Motorsport Honda of Jack Young. Several battles soon developed, with a three-way fight for P5 between Klim Gavrilov, Tom Coronel and Jelmini becoming a four-way affair when Young closed up on Jelmini. There then followed several thrilling laps with some great scraps between Gavrilov and Coronel and Young and Jelmini. The Hyundai of Jáchym Galáš passed Young on Lap 7 and the pair made contact which pushed the HYUNDAI | Janík Motorsport Elantra into a half-spin, although Galáš held the slide beautifully and initially kept the position before starting to drop back.

There were more furious battles as the race entered its closing stages, with both John Filippi and Viktor Davidovski running wide and taking to the gravel traps. Nicola Baldan was attacking his Target Competition teammate Josh Files for the final podium spot, but it seemed the first two places were settled. Girolami had led from the outset and it seemed that Callejas couldn’t quite get within striking distance, no matter how hard he tried.

Then, on the final lap, Girolami appeared to run slightly wide as the pair ran through Les Combes for the last time and Callejas seized his chance. The CUPRA eased past the Audi and the Spanish teenager held his nerve for the remaining half a lap until he took the chequered flag with a margin of 1.606 seconds over Girolami. Behind the pair, Files held off Baldan to record his first podium finish of the season while Tom Coronel was fifth ahead of Gavrilov. TCR Europe debutant Marco Butti took the honours in the Rookie class while Evgenii Leonov gave the Volcano Motorsport team yet another reason to celebrate by taking maximum points in the Diamond Trophy ahead of Viktor Davidovski.

Race 2 is scheduled to start at 11.35CEST on Sunday and will be streamed live via the TCR Portal, on TCR TV and the TCR Europe series’ social media platforms.