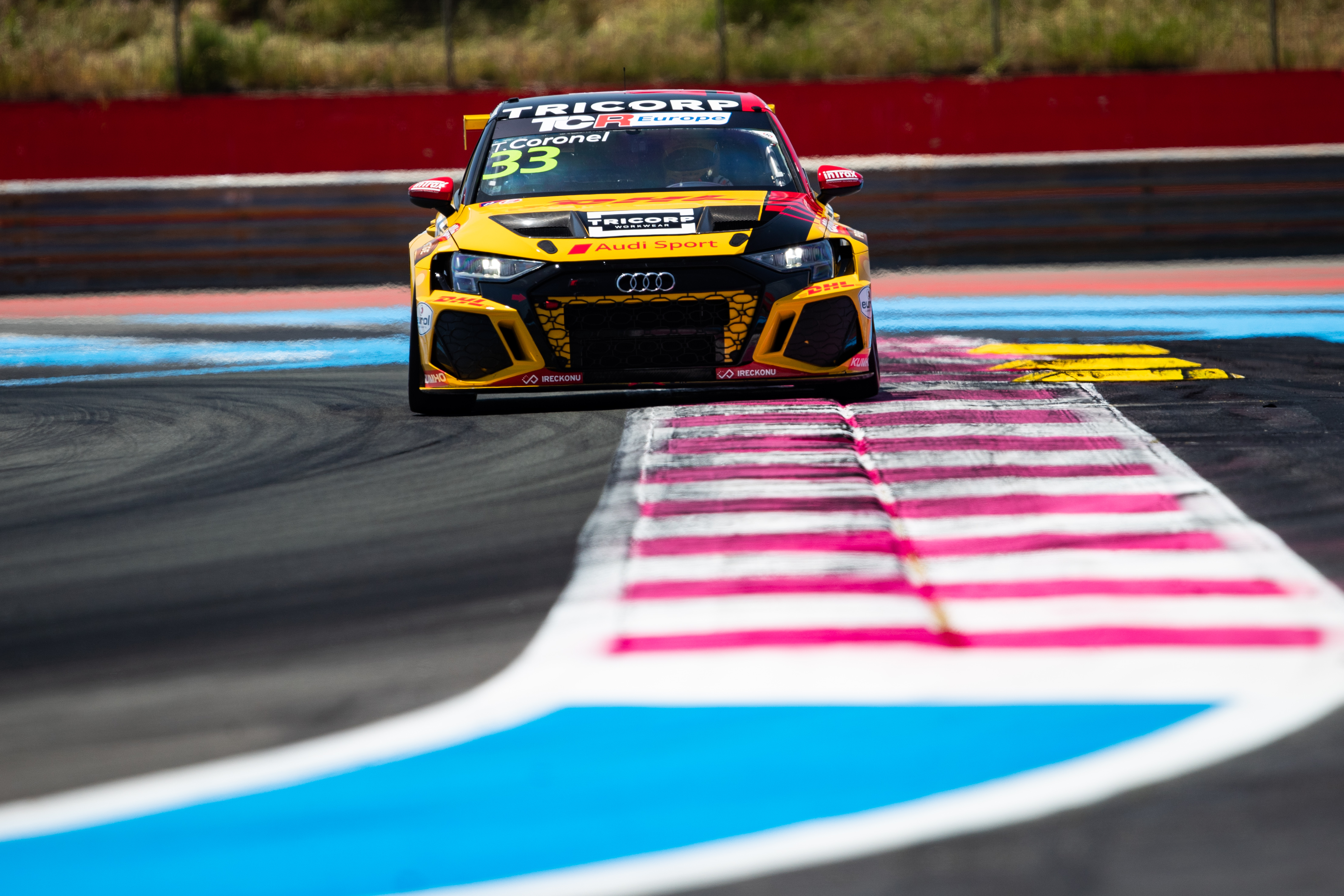 Comtoyou Racing’s Tom Coronel will start Race 1 at the Circuit Paul Ricard at Le Castellet from pole position after setting the fastest time in the two-stage Qualifying session at the French circuit in his Audi RS 3 LMS TCR. Behind the Dutch driver will be the Target Competition Hyundai Elantra N cars of Felice Jelmini and Josh Files, while it will be Coronel’s teammate Viktor Davidovski who will be on pole for tomorrow’s reversed-grid Race 2 thanks to the Macedonian driver qualifying in tenth place.

In the twenty-minute first stage of Qualifying, it was the two HYUNDAI | Janík Motorsport Elantra N cars of Mat’o Homola and Jáchym Galáš that were the early pace-setters, with times of 2:13.863 and 2:14.001 respectively on their first competitive laps. Both drivers then improved their times on the next lap, but Jack Young (Halder Motorsport, Honda Civic Type R) then went fastest with a lap of 2:12.740, ahead of Felice Jelmini (Target Competition, Hyundai Elantra N) with a 2:12.780 and Viktor Davidovski (Comtoyou Racing, Audi RS 3 LMS TCR) on 2:12.893. Davidovski’s teammate Franco Girolami was fourth fastest with a time of 2:12.900 and Josh Files in P5 in another of the Target Competition Hyundai cars (2:13.933).

With less than three minutes of Q1 remaining, Pepe Oriola went P6 in a Brutal Fish Racing Honda Civic Type R (2:13.174). Then, in the final minute or so of Q1, Jelmini briefly went P1 with a time of 2:12.513 before being beaten by his teammate Files (2:12.368). Klim Gavrilov then went third fastest with a time of 2:12.625. The twelve drivers who went through to Q2 were Files, Jelmini, Gavrilov, Young, Davidovski, Girolami, Coronel, John Filippi, Oriola, Homola, Isidro Callejas and Evgenii Leonov.

The ten-minute Q2 was then the usual scramble to set lap times that would decide the grids for both races. The Volcano Motorsport CUPRA of Isidro Callejas was the first to set a competitive lap time (2:12.748) ahead of his teammate Gavrilov (2:12.981). Jelmini then went fastest with a lap of 2:12.080 before Coronel broke the 2:12 barrier with a 2:11.828 in the Comtoyou Racing Audi. Files was P3 (2:12.232), Filippi P4 (2:12.362) and Girolami P5 (2:12.492). After the flag fell, Homola briefly improved his best time but the lap was deleted due to a track limit infringement and so he finished the session in P12 – the Slovakian driver being one of several to be penalised for the same reason. After the session, the Stewards reinstated Callejas's best lap of Q1 after recognising that the wrong lap had initially been deleted. This meant the young Spaniard was classified as finishing third in Q1.

Tom Coronel will therefore be on pole for Race 1 with Felice Jelmini alongside him on the front row. Thanks to the reversed grid, it’ll be another Comtoyou Racing Audi RS 3 LMS TCR on pole for Race 2 tomorrow, with Viktor Davidovski having finished Qualifying in tenth place.

Race 1 is scheduled to start at 13.40CEST this afternoon and will be streamed live on TCR TV and the series’ social media platforms.