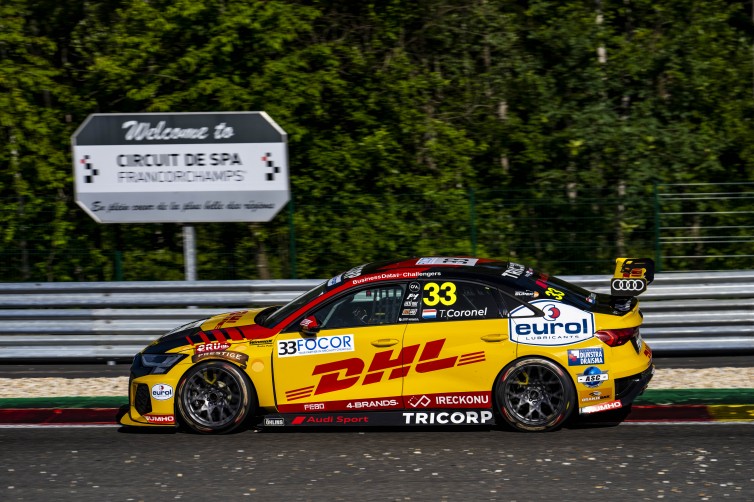 Comtoyou Racing’s Tom Coronel set the fastest time in Free Practice 1 at the team’s home circuit of Spa-Francorchamps, a fraction under three-tenths of a second ahead of the Volcano Motorsport CUPRA Leon Competición of Isidro Callejas. Pepe Oriola was third quickest in the Brutal Fish Racing Honda Civic Type R, just three-thousandths slower than Callejas. As an indication of just how competitive the weekend’s two races promise to be, the top nine cars were covered by less than eight-tenths of a second.

Coronel’s first quick lap then saw him set the fastest time so far (2:31.445) with just under eleven minutes of the half-hour session remaining. He then improved that time on his next lap with a 2:31.184 and that time wouldn’t be beaten. Galáš would improve his best lap with a time of 2:31.791 to end FP1 in sixth place. A number of drivers experienced issues during the session, including Marco Butti in the Audi RS 3 LMS TCR, who was making his debut in the TCR Europe series. The Italian teenager was forced to return to the paddock in the Élite Motorsport by Comtoyou car after only managing to complete two laps. Coronel’s session, too, wasn’t without incident, as the Dutch driver experienced a broken radiator on his Audi after taking to the gravel at the exit to the Stavelot bend.

Tom Coronel (fastest): “I think that went very well. Of course, I know this track very well and I’ve done a lot of long-distance races here. It felt good and I had my pick of the tyres I suppose. I made two mistakes as there have been a lot of changes to the track which I hadn’t seen before, so maybe I over-pushed it a little which is why I broke the radiator when I ran on the outside through the gravel through Stavelot. We’ll have to change the radiator for FP2 but it’s not an issue. That was a difficult moment, but it’s good that we learnt that now ready for the race. I always feel strong here, even though I had some difficulty with the braking and I overshot a few times but I was on the limit so it felt good.”

Free Practice 2 is scheduled to start at 13.30CEST this afternoon and live timing will be available via the TCR Europe website. The two-stage Qualifying session and Race 1 are both tomorrow, with Race 2 on Sunday. Both races will be streamed live on the series’ social media pages and on the TCR Portal.