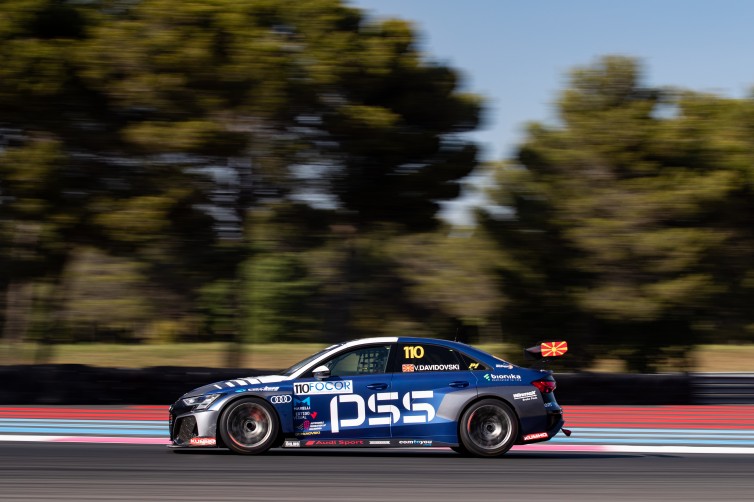 Starting from pole position, Davidovski was first into Turn 1, but behind him Gavrilov passed Oriola for P2 off the start line and Coronel passed the Target Competition Hyundai Elantra of Felice Jelmini for P8. The opening lap was then quite frantic, with Franco Girolami attacking and then passing Isidro Callejas for P4, Josh Files passing John Filippi for P6 and then closing up on Callejas and Coronel running alongside Filippi as they drove up the start/finish straight to start Lap 2. Coronel duly made the passing move stick to move up another place after starting from ninth on the grid.

On Lap 2, Nicola Baldan passed Evgenii Leonov for P12; the Volcano Motorsport driver having been given a three-place grid penalty following an incident involving the Hyundai of Jáchym Galáš in Race 1. At the end of the lap, Coronel moved up into sixth place when he passed Files. On the following lap, there was contact between the Lema Racing CUPRA of Giacomo Ghermandi and Martin Ryba’s Brutal Fish Racing Honda that saw Ryba half-spin and drop to the back of the field while Ghermandi received a drive-through penalty for the incident. Files, meanwhile, headed into the pits at the end of the lap after running through the last few corners with blue smoke streaming from the front of the car. The Target Competition mechanics soon had the Elantra on its way again, but any thoughts of a top ten finish were over.

The action continued on Lap 4, with Coronel continuing his charge up the leaderboard by passing Callejas for P5. Filippi was then the next driver to attack Callejas in a scrap that would last for several laps. There were then two distinct battles going on among the top five; Gavrilov was steadily catching Davidovski while Oriola, Girolami and Coronel would spend a number of laps battling for the remaining podium place.

On Lap 8, Coronel finally passed Girolami and began to reel in Oriola, while Filippi was also finally able to pass Callejas for P6. On the race’s penultimate lap, Mat’o Homola slowed and retired from ninth place, which meant his HYUNDAI | Janík Motorsport teammate Galáš inherited P9 and Nicola Baldan moved into the top ten.

On the final lap, Oriola squeezed out Coronel as the pair headed through the chicane on the Mistral Straight and the Dutch driver had no option other than to cut the corner. It meant Coronel had moved into P3, but after several corners Coronel gave the position back to Oriola. In doing so, however, Girolami also passed his teammate and so Coronel would have to settle for fifth place at the chequered flag.

But the victory firmly belonged to Davidovski in the other Comtoyou Audi. He drove faultlessly throughout the ten-lap race to hold off a determined challenge from Gavrilov. In doing so, he took another maximum score in the Diamond Trophy – a 100% record from the four races so far – although he isn’t nominated to score Teams’ points and so it was Gavrilov who secured the maximum forty points for Volcano Motorsport.

In the Drivers’ championship standings, the weekend’s results mean Girolami now has a thirteen-point advantage over Coronel with Gavrilov in third place, a further eleven points behind.

The next TCR Europe event will be held at the legendary Spa-Francorchamps circuit in Belgium over the weekend of June 17th – 19th.