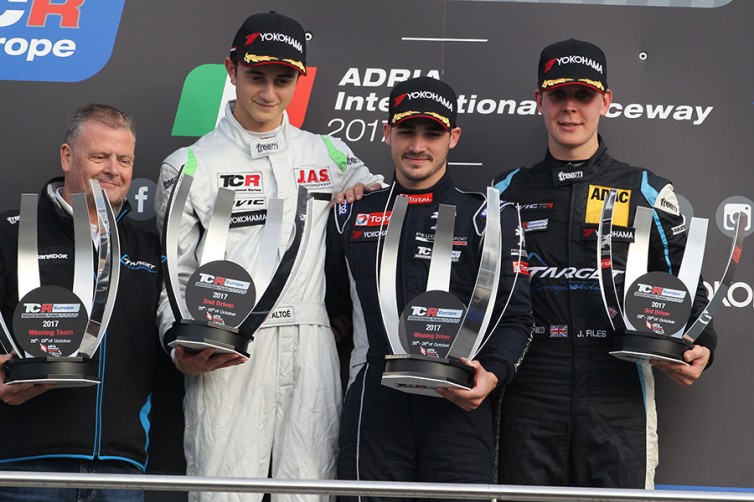 Drivers’ quotes after the two races

Aurélien Comte (1st in the TCR Europe): “The car is still lacking something in terms of performance, but it has really good race pace so I was not surprised to have been running at the front in the race. I had planned to make the best start I could and create a gap at the front. It was quite difficult at the end of the race to keep Giacomo Altoè behind, but in the end everything was OK and we took the title.”

Giacomo Altoè (2nd in the TCR Europe): “I’m very happy with the result, although I am also a little bit disappointed too. As Aurélien and I finished on the same points, but he won the race so he became the champion. It was a really tough second race and I have to overtake a lot of cars, but at the same time I didn’t want to take too many risks. Even so, it was still a good race for me. I asked the team on the radio about the points and they said that I was leading, so I could stay in 2nd place. If I’d known, I could have tried to overtake.”

Josh Files (3rd in TCR Europe and winner of Race 1): “I believe my move at Turn 1 in Race 2 was a calculated risk. I actually made the apex, but it was just unfortunate that Antti Buri turned in. But, this is motorsport – I didn’t come here to finish 2nd and just score points. I came here to win races. My goal was to get past Comte, which I did and then the team told me I had a drive through penalty, because I wanted to hunt down Tarquini for the win. I remember meeting Gabriele when I was three years old, in 1994 when he was racing in the BTCC. Not only did I get to race against him but also beat him in Race 1, so overall I’m very happy with the weekend.”

Gabriele Tarquini (winner of Race 2): “It wasn’t a bad weekend for us at all! I enjoyed it a lot and had the chance to experience lots of different types of tyres. It was a tough race, the Honda is very fast car and they did a great job to make the best starts. Even if I had a small problem, I still found it pretty tough to overtake Files. I tried to push as hard as possible during the race, but without any mistake from him it was impossible for me to overtake in Race 1. The second race was much more fun because by starting 10th, I had some great fights and overtaking with the other cars.  Even though it wasn’t easy to take the win, I definitely enjoyed it.”

Giovanni Altoè (1st in the DSG class): “I think I made a very good start in the race. For me it was the first time I’ve raced and started a TCR car, so I didn’t know how to do it properly. Fortunately I was more consistent in the race, I managed to look after my tyres better and make the move for the lead. I’m very happy to finish so well with a lot of the sequential gearbox cars behind me, so it was very nice for me to score a good result.”