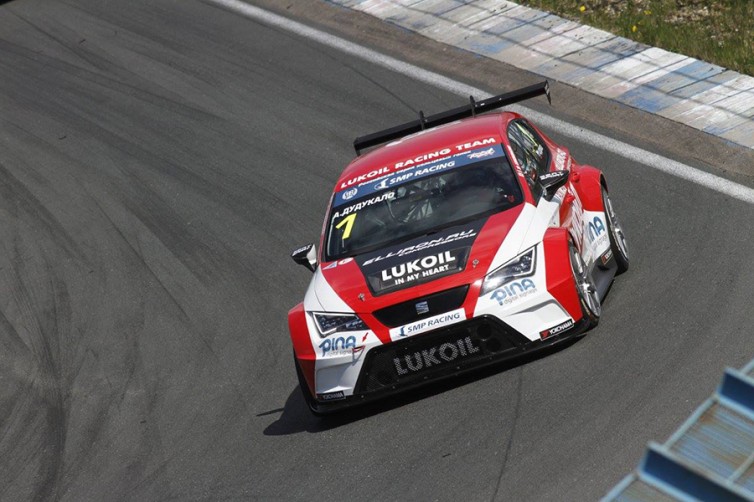 Dudukalo-Karamyshev make 1-2 for Lukoil in Race 2

2015 Russian champion Aleksey Dudukalo and double European Touring Car Cup winner Nikolay Karamyshev claimed a brilliant 1-2 finish for Lukoil Racing in the second race of the opening event of the SMP Russian Circuit Racing Series at Smolensk Ring tha was also counting towards the TCR Trophy Europe.
Pavel Yashin (Neva Motorsport) took the lead at the start, sprinting from the pole position on the top-six reverse grid. However, Yashin lost the first position to Karamyshev during the first lap.
On lap 2, Yashin was further demoted by Irek Minnakhmetov and Dudukalo, as they moved up to second and third. A few moments later Dudukalo took second from Minnakhmetov.
On lap 4, Race 1 winner Dmitry Bragin overtook Minnakhmetov for third, while Roman Golikov and Lev Tolkachev passed Yashin climbing to fifth and sixth respectively.
On lap 5, Dudukalo took the lead from Karamyshev who was closely chased by Bragin; however, on the following lap the TAIF Motorsport driver made a mistake and lost contact; the gap between Karamyshev and Bragin grew consistently since.
Positions froze in the second part of the race, with the only change being Tolkachev overtaking Golikov for fifth.
Dudukalo won from Karamyshev, Bragin and Minnakhmetov. The same three drivers fill the top positions in the TCR Trophy Europe standings: Dudukalo leads with 25 points, Bragin is second with 18 and Karamyshev third with 15.
The next event valid for the TCR Trophy Europe will be the second round of the Italian Touring Car Championship (CIT), at Misano World Circuit Marco Simoncelli, on June 11 and 12.