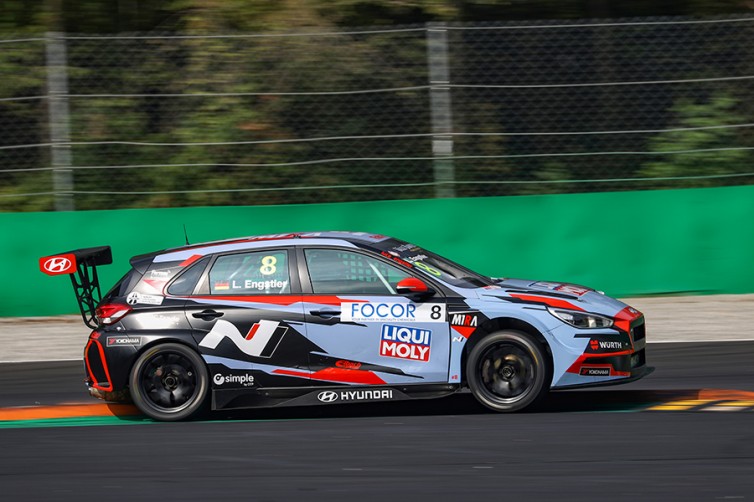 The Hyundai cars continued setting the pace in the Practice for the TCR Europe final event of the season at Monza. This time it was Luca Engstler who posted the fastest lap of 1:57.009, improving by nearly half-a-second the previous lap record set by Mat’o Homola in the first session.
Engstler was three tenths faster than Andreas Bäckman and four tenths faster than Josh Files, while Luca Filippi was fourth fastest, five tenths off. Santiago Urrutia’s Audi was placed fifth and disrupted the line of Hyundai cars on top of the timesheet, as he was faster than Mat’o Homola and Nelson Panciatici. The latter was finally able to test after missing the first session due to a broken power steering belt.
Julien Briché and Aurélien Comte were eighth and ninth fastest in their Peugeot 308 cars, nine tenths behind Engstler, while Gilles Magnus rounded off the top ten and Guilherme Salas was 11th in the Renault Mégane. The best of the Volkswagen Golf and CUPRA cars were Gianni Morbidelli’s and John Filippi’s in 14th and 15th positions.
Josh Burdon was finally able to join after missing FP1, but spent the session to run in the new engine, while his teammate Martin Ryba couldn’t run as his car is still under repairs after his crash in the previous session.
The session was briefly disrupted by the red flag after ten minutes when Viktor Davidovski spun off with a brake failure.
Action will resume tomorrow morning at 10:45 with the Qualifying session.