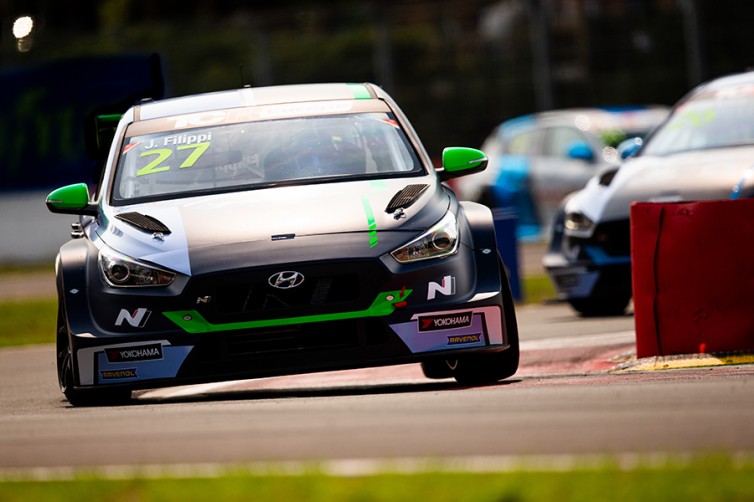 Filippi is fastest in the first practice at Zolder

John Filippi posted the fastest time in TCR Europe’s first free practice at Zolder. Towards the end of the session, the young Corsican drove his Target Competition Hyundai i30 N to complete a lap of 1:37.486, and so demoted his fellow Hyundai driver Dániel Nagy of BRC Racing Team to second, beating him by only four thousandths of a second. Third fastest was Brutal Fish Racing Team’s Pepe Oriola in his Honda Civic Type R, a further 27 thousandths adrift. None of the other drivers was able to clock times under the 1:38 mark.
After Mehdi Bennani (1:38.348) and Homola (1:38.324) had posted provisional fastest times, Oriola moved into the lead with a lap of 1:38.154 that remained the fastest for most of the session.
There were several improvements, with Andreas Bäckman, Nagy and Homola taking turns in P2, until Nagy and then Filippi posted the two fastest laps for good. Homola was able to improve further (1:38.117) to provisionally claim P3, but eventually Oriola demoted him to fourth and Bäckman to fifth.
Bennani was the best Audi driver in sixth position (1:38.246); he was followed by the race winners of the series opener at Le Castellet: Daniel Lloyd (1:38.862) and Mike Halder (1:38.490).
The Peugeot cars struggled to set competitive lap times; eventually Julien Briché placed the best 308 in tenth position, 1.2 seconds off Filippi’s time.

Filippi commented: “It’s a much better start than we had in France, but at the end of the Qualifying there we won the pole, so it’s a really good start. It’s good for my confidence and I hope the weekend will stay like this. Of course, we don’t know what the others did, if they used new tyres or if they really pushed, but I know where I am, and I cannot do much more. This was the only track where I tested before the season, so I was really confident coming here. Even with the 60kg we are quite fast and so I think this is good news.”
The second free practice will take place at 16:20.