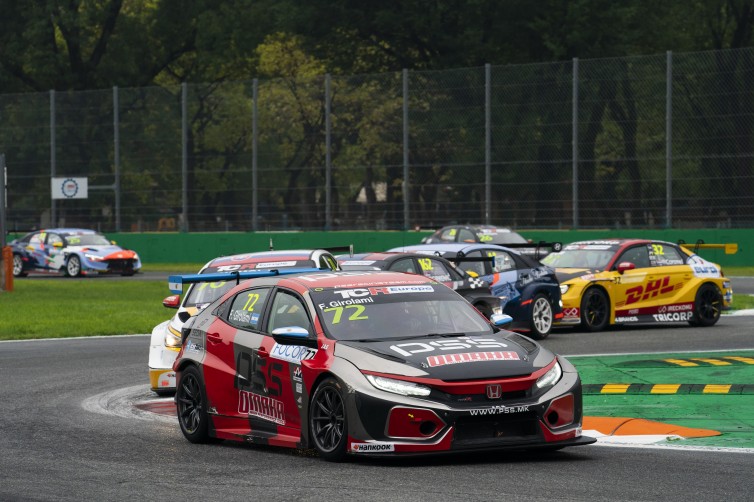 Girolami does the double at Monza while Azcona gets a penalty

In another incident-packed race at Monza, Franco Girolami scored his second victory of the weekend to move closer to series leader Mikel Azcona in the battle for the 2021 TCR Europe Drivers’ Championship. Azcona crossed the finish line in second place, but received a five-second penalty and so dropped to fifth, allowing Mat’o Homola and Tom Coronel to claim podium finishes.

At the start, Girolami’s PSS Racing teammate Viktor Davidovki was unable to get off the start line, while it was pole-sitter Nicolas Baert who was first into the chicane at Turn 1 ahead of Jimmy Clairet. Azcona made a better start than Mat’o Homola and so lay in third place, but the best start of all was made by Girolami. From tenth on the grid, the Argentinian driver was already in fourth place as the field streamed out of the chicane. Azcona then closed up behind Jimmy Clairet’s Peugeot and there was contact as Azcona made an overtaking move going into the Parabolica at the end of Lap 1. Azcona’s CUPRA moved into second place as a result, but the incident was quickly flagged up as being under investigation.

On Lap 2, Girolami and Homola both passed Clairet for third and fourth places respectively, while there was contact between TCR Europe newcomer Rubén Fernández and Martin Ryba going into the Roggia chicane that left the Brutal Fish Honda crabbing awkwardly as it headed slowly back to the pits. Fernandez wasn’t able to continue and the CUPRA pulled up at the exit to Roggia, which resulted in yellow flags being waved at Turn 5 for the remainder of the race and the Stewards announcing that the incident was also under investigation. On the next lap, Girolami passed Azcona for second place coming out of the Roggia chicane, although the Volcano Motorsport team would later protest that the move had been made under the yellow flags.

At the start of Lap 4, Girolami flung the Honda into Turn 1 and went around the outside of Baert to move into the race lead. Felice Jelmini’s Hyundai Elantra went straight on at Turn 1 and had to take to the escape road, while at the end of the lap Azcona tried to go around the outside of Baert at the Parabolica and the pair ran side-by-side down the start/finish straight, with Azcona squeezing past the Audi to claim second place as they entered the chicane at the start of Lap 5. Homola then immediately began attacking Baert for P3 and Girolami received a warning for racing line infringements.

There was contact between the two Championship rivals as they headed into Turn 1 on the next lap and this time it was Azcona who had to use the escape road. On Lap 7, Homola passed Baert for third position, which became second place on Lap 8 when Azcona made a rare mistake and ran wide at Roggia, dropping behind both Homola’s Hyundai and Baert’s Audi

Azcona soon passed Baert to move back up to third behind Homola, but then came the announcement that the Spaniard was being given a five-second penalty for track limit infringements and the contact with Jimmy Clairet on the first lap. With Girolami repeatedly weaving as he headed down the straight between the Ascari chicane and the Parabolica, he received a warning flag for repeated racing line infringements.

On Lap 9, both Baert and Jack Young went straight on at Turn 1, which allowed Tom Coronel to move up to fourth place on the track (P3, thanks to Azcona’s penalty). Azcona then passed Homola for second place and set off in pursuit of Girolami, but despite another thrilling final lap duel between the pair, Girolami crossed the finish line a fraction ahead of Azcona. Thanks to the penalty, Homola and Coronel were able to take second and third places on the podium, while Jack Young finished fourth and Azcona dropped to fifth.

The result means Girolami has narrowed the gap to Azcona in the Drivers’ championship to 10 points, with Coronel now in third place ahead of Langeveld and Jimmy Clairet having moved up to fifth place ahead of Bennani. Just one more event remains, so 90 points are still potentially available from the season’s final Qualifying session and two races.

In two weeks’ time, the TCR Europe series heads to Barcelona over the weekend of October 9th and 10th for its final event of 2021.