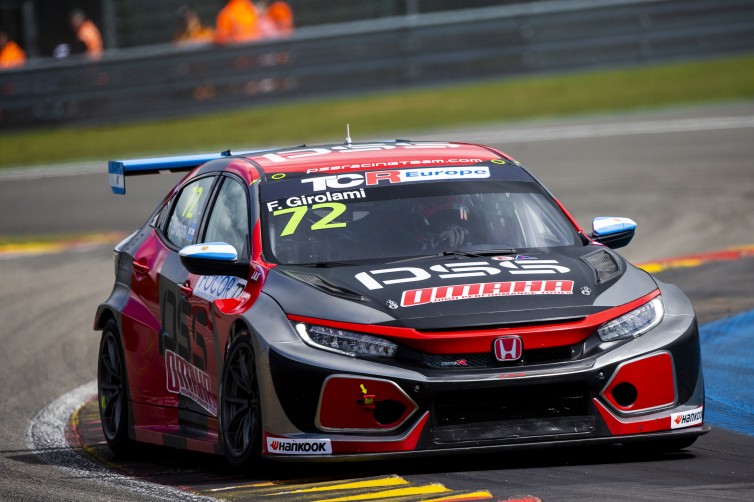 Girolami edges out Azcona in first Free Practice at Spa

The current top two drivers in the TCR Europe standings, Franco Girolami and Mikel Azcona, ended the first Free Practice session at the Belgian circuit in first and second places after a dramatic final few minutes of the thirty-minute session. Behind the pair, Mehdi Bennani and Sami Taoufik were third and fourth fastest while the young Spaniard Isidro Callejas completed the top five.

With Viktor Davidovski and Dániel Nagy electing not to travel to Spa, twenty of the twenty-two cars entered for the event took part in the session. Bennani, in one of the Sébastien Loeb Racing Hyundai Elantra N cars, was the early pace-setter, clocking a time of 2:32.992 on his second competitive lap. His teammate Felice Jelmini was second fastest (2:33.242) and Nicolas Baert (2:33.269) third in a Comtoyou Racing Audi RS 3 LMS.

The dramas weren’t over, though, as the Brutal Fish Honda Civic Type-R of Isidro Callejas went P4 in the dying moments of the session with a time of 2:32.548 while the PSS Racing Honda of Franco Girolami was clearly on a quick lap as the chequered flag fell. Sure enough, the Civic crossed the line to record a lap of 2:31.492, the Argentinian driver pipping Azcona by a little over half a second.

Several drivers received warnings about track limits during the session, with both Tom Coronel and Nicolas Baert having lap times deleted after repeated infringements.

Franco Girolami (fastest): “I’m very happy; the entire PSS Racing team did a very good job and the car was very fast. But you know, this is only FP1 - all the other drivers will be faster in the other sessions and so we need to improve. I put two new tyres on the car but we don’t know what the other drivers did, that’s the most important point. We also made some changes to the car and it was very, very good as a result.”

Free Practice 2 is scheduled to start at 16.55 CEST. Live timing will be available via the TCR Portal tcr-series.tv