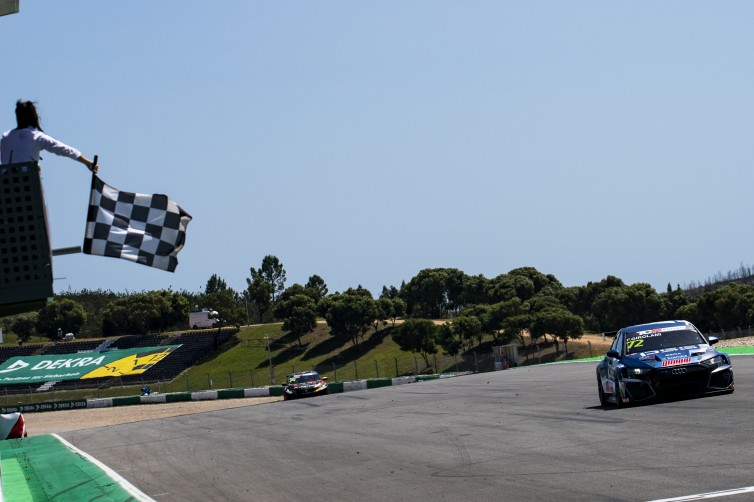 Franco Girolami, driving a Comtoyou Racing Audi RS 3 LMS TCR, took a dramatic win in the weekend’s second race at the Autódromo Internacional do Algarve after starting from fifth place on the grid. Pole-sitter Pepe Oriola finished second and Girolami’s teammate Tom Coronel was third. The highest-placed Rookie driver was once again Luīs Cidade who finished in fourteenth place overall. After the race, a clearly emotional Girolami dedicated the victory to his wife and their baby, who is expected tomorrow, while a clearly angry Oriola exchanged words with Girolami in the post-race Parc Fermé and refused to shake his hand on the podium.

At the start, it briefly looked as though John Filippi (Sébastien Loeb Racing - Bardahl Team, CUPRA Leon Competición) had nosed ahead of Oriola on the run down to Turn 1, but it was the Brutal Fish Racing Honda Civic Type R that entered the corner in the lead. The best start, though, was made by Girolami, who’d already made up two places and was third behind Oriola and Filippi while Josh Files (Target Competition, Hyundai Elantra N) had dropped to fourth. The race’s first casualty was the Volcano Motorsport CUPRA of Evgenii Leonov, which pulled up at Turn 3 after apparent contact with Mat’o Homola’s HYUNDAI | Janík Motorsport Elantra. Homola himself pulled into the pits at the end of the lap to get the car checked over and eventually finished the race in last place.

On Lap 2, there was contact between the two CUPRA cars of Gustavo Moura Jr and Giacomo Ghermandi, with the Volcano Motorsport car ending up stranded at the side of the track while Ghermandi’s car was able to continue. On the following lap, just after Isidro Callejas had passed Mike Halder for P7, the Safety Car was called into action so that Moura’s car could be recovered and debris cleared from the track.

After two Safety Car laps, racing resumed on Lap 6. Oriola slowed to bunch up the field and when he accelerated, Girolami went with him. The pair then ran close together for most of the lap. Race 1 winner Jack Young passed his teammate Mike Halder for eighth place, with the Hyundai Elantra of Jáchym Galáš also passing Halder for seventh moments later. Callejas then passed Klim Gavrilov for P6.

The start of Lap 7 then saw Oriola and Girolami run side by side through the first three corners after the Audi driver attacked the Honda on the run down to Turn 1. Approaching the hairpin at Turn 4, Girolami had the inside line; the Argentinian driver forced Oriola to run wide on the exit and so snatched the lead. Jack Young then passed Callejas for P6, with Coronel passing Filippi for third place on the next lap.

By Lap 10, Young and Callejas were battling for sixth place and Gavrilov took full advantage of the battle to squeeze past both of them when they made contact. Galáš also passed the pair to move into seventh position, leaving Callejas in P8 and Young in P9. On Lap 12, Nicola Baldan passed Michelle Halder to move into fifteenth place but Halder was ultimately able to reclaim the first of the points-scoring places. Filippi was attacking Coronel for third place, but the Dutch driver held on to deliver another podium finish for Comtoyou along with Girolami’s win.

There were no major changes over the race’s two final laps, and so Girolami was able to take his first win for his new team by just over two seconds from an unhappy Oriola. Coronel was third, while Filippi, Files and Gavrilov rounded off the top six. After the race, however, the Stewards handed a three-second penalty to Jack Young for causing the contact with Callejas, which dropped him to eleventh place. Young also received a suspended three-place grid penalty for the same incident. Also called in front of the Stewards was Felice Jelmini, who was given a thirty-second penalty for repeated track limit infringements that dropped him to sixteenth place and so out of the points.

In the Drivers’ championship standings, the result means Girolami has now moved into the lead and has a nine-point advantage over Young with Mike Halder in third place.

The next TCR Europe event will be held at the Paul Ricard circuit at Le Castellet in France over the weekend of May 20th – 22nd.