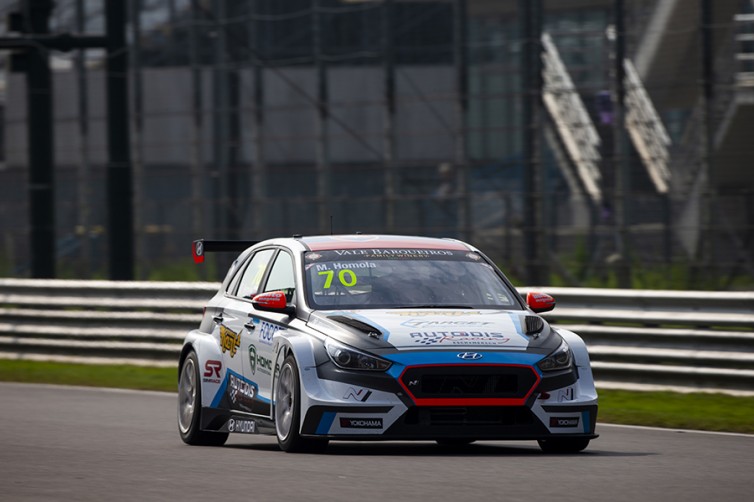 Mat’o Homola clocked the fastest lap in TCR Europe’s first Practice at Monza and also set a new record for TCR cars on the Italian circuit. The Slovak youngster was clocked at 1:57.488, demoting Luca Engstler to second, while the current championship leader Josh Files was placed third. They were all able to beat the previous record of 1:57.626 established by Jean-Karl Vernay last year; Engstler’s fastest lap was 1:57.590 and Files’ 1:57.617.
The Hyundai i30 N cars dominated the session and filled the first six places on top of the timesheet all covered by 0.6 seconds, with Andreas Bäckman, Dominik Baumann and Jessica Bäckman who were placed fourth, fifth and sixth.
The best of the rest was Gilles Magnus in seventh position with a lap of 1:58.129 who was followed by two other Hyundai cars: Natan Bihel’s and Luca Filippi’s. Santiago Urrutia rounded off the top ten ahead of Sami Taoufik, the fastest of the six newcomers.
Gianni Morbidelli and Aurélien Comte placed the best of the Volkswagen Golf and Peugeot 308 cars in 12th and 13th positions; they were followed by Julien Briché – Files’ only contender in the title fight – Guilherme Salas in the Renault Mégane and Stian Paulsen in the best of the CUPRA cars.
The session was red flagged 90 second before the end, when Martin Ryba crashed at T7; it was not a lucky session for Brutal Fish Racing, as Josh Burdon completed only 5 five laps and Daniel Lloyd stopped on the track with a gearbox problem. Another car that suffered from technical issues was Nelson Panciatici’s Hyundai with a broken power steering belt and so the Frenchman could only complete one flying lap and remained seven seconds off the fastest pace.
The second free practice will take place at 16:20.