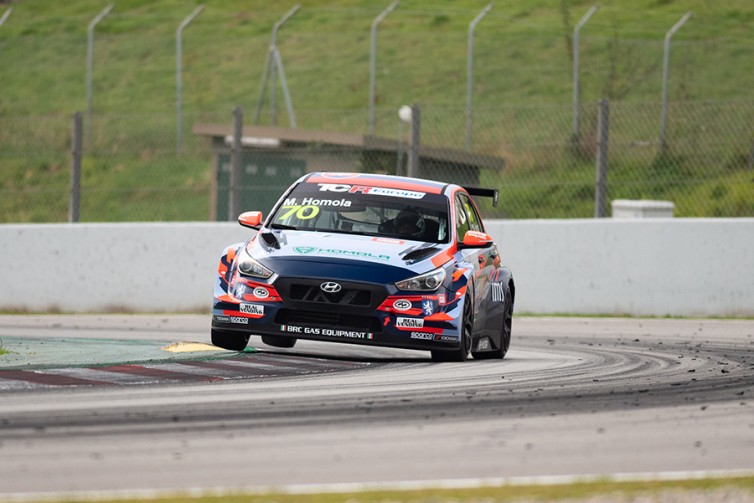 Homola to start from the pole in Barcelona Race 1

Mat’o Homola claimed the first pole position during the current TCR Europe season for himself and BRC Racing Team. A result that was made even sweeter for the Italian outfit by Dániel Nagy’s third position.
This afternoon’s first race promises to deliver a thrilling fight between the two Hyundai drivers and the Honda cars of Mike Halder and Pepe Oriola who qualified second and fourth respectively.
It was a very close session, with the fastest eight drivers in Q2 covered by only eight hundredths of a second.
Comtoyou Racing’s three Audi drivers qualified one behind another – Mehdi Bennani fifth, Sami Taoufik sixth and Nicolas Baert seventh – with John Filippi in eighth position.
Jessica and Andreas Bäckman were ninth and tenth, which means they will share the front row of the reversed grid for tomorrow’s Race 2.
Teddy Clairet and Evgenii Leonov closed the timesheet in 11th and 12th positions, however the Frenchman will start Race 1 from the bottom of the grid due to an engine change.
In Q1, Jessica Bäckman set the fastest lap, as she was clocked at 1:54.419 in the final stages. She beat Baert by 71 thousandths of a second, while Nagy (1:54.503) and Homola (1:55.682) advanced into P3 and P4 at the end of their last timed lap. Leonov ranked fifth (1:54.683) while Bennani, Taoufik, Filippi, Andreas Bäckman, Mike Halder, Oriola and Teddy Clairet completed the top-twelve for Q2.
Quite surprisingly the current points leader Daniel Lloyd, and last year vice champion Julien Briché – who had been first and second in the two races of the previous event at Monza – didn’t place themselves higher than 13th and 14th as they both struggled with the set-up of their cars laden by the Compensation Weight.
Race 1 will start at 16:05 local time (CEST), live streaming at www.tcr-series.com.