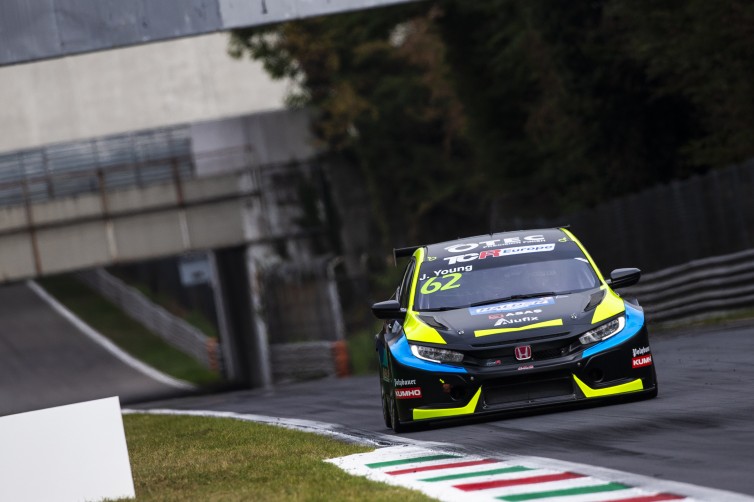 The Halder Motorsport Honda Civic Type R of Jack Young set the fastest time in the first Free Practice session at Monza, with the Northern Ireland driver finishing the half-hour session 0.223 of a second clear of the Comtoyou Racing Audi RS 3 LMS of Tom Coronel. The current leader of the Drivers’ championship, Coronel’s teammate Franco Girolami was third quickest while his nearest rival for the title, Josh Files, was only eleventh fastest.

With less than four minutes left, Coronel went second quickest (1:56.910) while Jelmini improved his best lap time with a 1:57.315 and was fifth ahead of Girolami. Young stopped at Turn 8 and so wouldn’t get a chance to better his time, although Callejas was able to improve (1:57.593) and was now seventh while Girolami went P3 behind Coronel with a time of 1:56.953.

Coronel then improved his best lap with a 1:56.698 but couldn’t quite beat Young’s time. Galáš (1:57.516) then went P7 ahead of Callejas in the final moments of the session, but there were no other changes and so Young ended the session ahead of Coronel, Girolami, Gavrilov, Butti and Jelmini. Back in the paddock, however, Young admitted that he was concerned about a technical issue with the car.

Jack Young (fastest): “That was pretty good – I didn’t even realise I was P1! The result was very positive but I had a small problem with the car so we need to analyse that. I’m a little bit disappointed but I don’t want to jump to conclusions and so we’ll just see what it is. Hopefully it’s nothing serious and we can get it fixed. I definitely got a good lap and maybe everyone else is hiding their true potential at this point, but tomorrow’s a very different day and so we’ll have to see.”

Free Practice 2 is scheduled to start at 17.44 CEST this afternoon and live timing will be available via the TCR Europe website. The two-stage Qualifying session and Race 1 take place tomorrow, with Race 2 on Sunday. Both races will be streamed live on the series’ social media pages and on the TCR Portal.