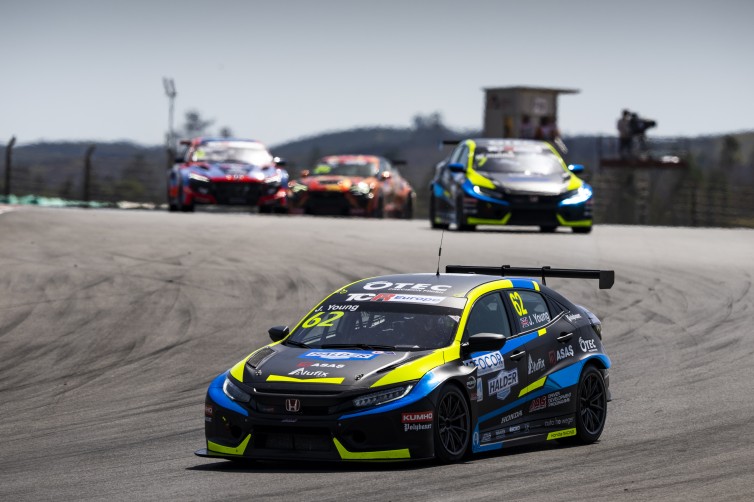 Pole-sitter Mike Halder made a strong start and led into Turn 1 while Young, starting from P2, moved across to block a fast-starting Baldan from P3. Franco Girolami (Comtoyou Racing, Audi RS 3 LMS TCR) moved up two places to P4 on the opening lap, as did Josh Files (Target Competition, Hyundai Elantra N), going from P8 to P6. Files then briefly moved up a further place before Isidro Callejas (Volcano Motorsport, CUPRA Leon Competición) retook fifth place. Also on the first lap, there was possible contact between Felice Jelmini and Martin Ryba that saw both drivers drop down the order.

There then began a number of battles at the top end of the leaderboard, with Callejas briefly passing Girolami on Lap 2 before missing his braking point and dropping back again. On Lap 3, Callejas attacked again and this time the Spanish teenager made the move stick. Then on the next lap, while Pepe Oriola was fighting with Tom Coronel for P8, Jack Young outbraked himself, Halder moved aside to avoid a collision and Young took the lead.

The second half of the twelve-lap race was then largely uneventful, with Young steadily opening up a gap over Halder and Baldan clearly determined to stay in touch with the pair. There was then a slight gap back to Callejas, Girolami, Files and Klim Gavrilov, with Coronel in P8 unable to shake off the attentions of Oriola and John Filippi, who rounded off the top ten. At the back of the field, Oriola’s Brutal Fish Racing teammate Martin Ryba was forced to take avoiding action to avoid a collision with the Lema Racing CUPRA of Giacomo Ghermandi and the Honda dropped to last place. Race leader Jack Young had no such issues, although he seemed to outbrake himself at the Turn 5 hairpin on Lap 7 and ran wide.

On Lap 8, Mat’o Homola’s Hyundai passed the Audi of Viktor Davidovski for P12 but Homola would ultimately finish behind his HYUNDAI | Janík Motorsport teammate Jáchym Galáš with Michelle Halder and Felice Jelmini completing the top fifteen points-scoring positions. Cidade finished sixteenth and so claimed the trophy for best-placed Rookie driver.

The win was Young’s first in TCR Europe but, thanks to the two second-place finishes he scored in the TCR Italy series at Monza last weekend, the JAS Motorsport Development driver now leads both the TCR Europe and TCR Italy championships.

Race 2 is scheduled to start at 14.15 local time (15.15CEST) on Sunday and will be streamed live via the TCR Portal, on TCR TV and the TCR Europe series’ social media platforms.