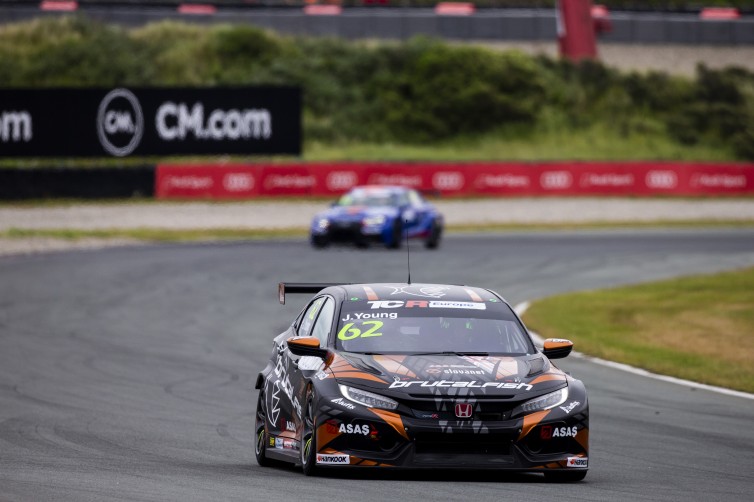 Jack Young, driving a Brutal Fish Racing Honda Civic Type-R, claimed his maiden TCR Europe pole position in a dramatic finale to the two-stage Qualifying session at Zandvoort. The 19-year old will have the Audi RS 3 LMS of Tom Coronel alongside him on the front row of the grid for this afternoon’s Race 1, with Coronel’s two Comtoyou Racing teammates Dušan Borkovič and Nicolas Baert on Row 2. Sami Taoufik will start on pole for tomorrow’s Race 2.

Klim Gavrilov survived a scare when his Audi ran wide through the gravel at Turn 8 and the Russian driver headed to the pits to get the gravel removed. He would, though, recover to get into the top twelve to go through to Q2. Nicolas Baert, meanwhile, would end the session in P5 with a time of 1:44.785, with the two local drivers Niels Langeveld (P4) and Tom Coronel (P2) setting best laps of 1:44.595 and 1:44.436 respectively. Sandwiched between the two was Girolami but it was Young who set the fastest time of 1:44.166. Behind those five, the other drivers who went through to Q2 were Borkovič, Gavrilov, Callejas, Jelmini, Bennani, Taoufik and Jimmy Clairet.

As the session drew to a close, both Coronel and Young were clearly on quick laps. Moments after the chequered flag was shown, Coronel stopped the clock on 1:43.749 and so it looked as though he’d snatched pole position from Young. Seconds later, the British teenager struck back with an even quicker lap time of 1:43.668 and so took his first TCR Europe pole position with a margin of just 0.081. Taoufik was tenth fastest and so will start Race 2 from pole with his teammate Langeveld alongside him on the front row.

Race 1 is scheduled to start at 17.20 CEST and will be streamed live on TCR TV and the series’ social media platforms.