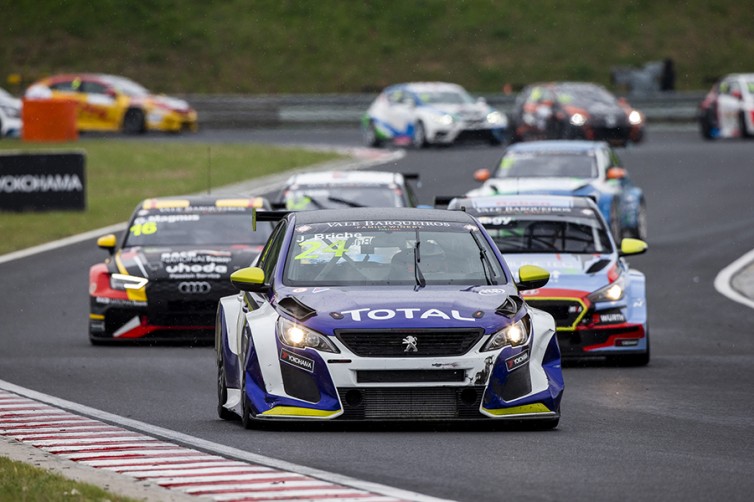 Before the second race, Julien Briché was excluded from Race 1 – in which he had been fourth – because his car was underweight. Instead of losing heart he hit the track with the will of making up from the disappointment and claimed a glorious victory for JSB Compétition and Peugeot Sport.
Lap after lap, while weather and track conditions changed from wet to dry and wet again, Briché engaged his competitors in a series of battles and won them all. He overtook Santiago Urrutia, Dušan Borković and finally the local hero Dániel Nagy.
Behind the experienced Frenchman, Comotoyou Racing’s 19-year-old Belgian Gilles Magnus, on his maiden Touring Car appearance, stole second from Nagy and found himself on top of the standings after the TCR Europe Series’ opening event. Though he is on equal points with another Touring Car rookie, Nelson Panciatici of M Racing.
Only three points behind the Magnus-Panciatici pair there is a trio formed by Race 1 winner Mat’o Homola, Nagy and Borković.
Two other drivers deserve to be mentioned as they both completed great recoveries: Josh Files and Luca Engstler. Files started from the pits, as the front left wishbone bearing needed to be changed, and climbed to the eight position; Engstler started 37th, after he missed Qualifying due to his crash in Practice, and finished 12th.
TCR Europe will resume at Hockenheim for round 3 and 4, on May 24/26.

Key facts
Grid – A light rain begins to fall just before the start; Files takes the start from the pit lane
Start – Borković starts better than Urrutia on pole position; there are contacts at the back of the field and Galáš’s car is pushed against the pit wall
Lap 1 – Nágy overtakes Borković for the lead at T1; John Filippi makes contact with Morbidelli and crashes; Briché moves up to second but goes wide at T2 and drops to 4th; the safety car is deployed
Lap 5 – When racing resumes, Nagy leads from Urrutia, Borković, Briché, Magnus, Comte, Panciatici and Homola; Borković and Briché moves ahead of Urrutia in 2nd and 3rd
Lap 6 – Borković, Briché and Magnus are in a tough fight and make contact several times; Comte is punted into a spin while in a battle with Panciatici and Potty over the 6th place
Lap 7 – Briché overtakes Borković for 2nd; Borković and Magnus make contact at the last turn; Panciatici overtakes Urrutia for 5th
Lap 8 – Luca Filippi crashes out; Briché steals the lead from Nagy, Magnus overtakes Borković for 3rd
Lap 9 – Magnus and Nagy make contact; Magnus moves up to 2nd; Potty overtakes Teddy Clairet for 7th
Lap 10 – Morgan and Al-Khelaifi crash; Files moves up to 9th after clashing with Kajaia and Teddy Clairet; Bihel and Jimmy Clairet crash
Lap11 – Briché wins from Magnus and Nagy; Lémeret and Files overtakes Potty for 7th and 8th; Milovan Vesnić wins the TCR Eastern Europe race after Martin Ryba spins off