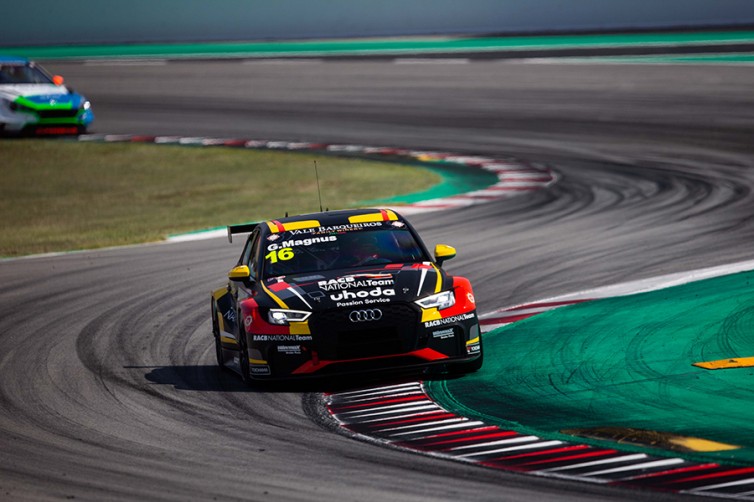 The Audi cars of Gilles Magnus and Santiago Urrutia set the two fastest laps in TCR Europe’s first practice at Barcelona.
The session was mostly used by the drivers to get their bearings around the Catalan track and lap times remained significantly slower compared to last years’ best qualifying time of 1:53.8.
Jimmy Clairet topped the timesheet for most of the 30-minute with a lap of 1:55.104, until the last three minutes, when Urrutia was clocked at 1:54.877. Seconds later, Magnus improved to 1:54.640 that remained the fastest lap for good, while Gianni Morbidelli and Daniel Lloyd moved into the third and fourth positions. Jimmy Clairet slipped down to fifth, ahead of his brother Teddy and Julien Briché.
Maxime Potty, Nelson Panciatici and Andreas Bäckman rounded out the top ten, with John Filippi 11th and newcomer Jack Young 19th.

Magnus said: “It’s still Free Practice, but it feels good to be P1 because that’s how you know how the car is on this track and how is the BoP. It looks pretty good and so I think we may be very happy. Tomorrow will probably be raining, so let’s see what happens, but I think it will be a tough weekend. The problem will be that we won’t have driven in the rain before Qualifying, so let’s see. Being P1 gives confidence and a good feeling for me and also for the team, so it’s nice. After two difficult weekends, this weekend should be ours again – that’s how it goes in TCR, sometimes it’s Hyundai or CUPRA or Honda and now it should be our weekend, if it stays dry!”

The fastest of the TCR Ibérico competitors was Evgenii Leonov in 20th position.
The second free practice will take place at 18:05.