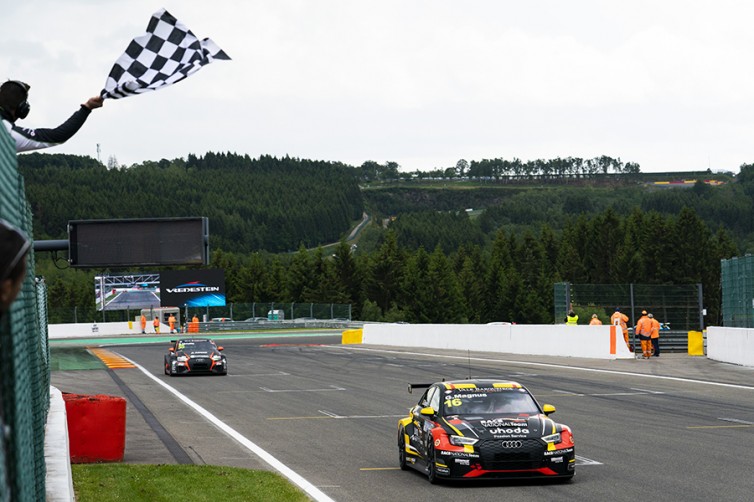 Gilles Magnus’ dream to win on his home racetrack came true in the first race of TCR Europe at Spa-Francorchamps. The young Belgian converted the pole position into him maiden win and jumped on top of the championship standings as well.
Magnus’ Comtoyou Racing Audi RS 3 LMS and the similar car driven by Santiago Urrutia for Team WRT delivered a brilliant fight and eventually finished first and second, which meant the first podium result for the Uruguayan. Podium that was completed by another Belgian youngster, Maxime Potty in the WRT-run Volkswagen Golf GTI who recovered to third after a bad start.
It was a podium of youth with Magnus (19), Urrutia (22) and Potty (19) totalling 60 years among them.
Aurélien Comte lost the third place to Potty in the final sprint and salvaged a fourth place for the Peugeot patrol that had higher ambitions. Jimmy Clairet and Davit Kajaia were classified fifth and sixth, their best results to far in the season.
Josh Files and Julien Briché, who had arrived in Belgium as first and second in the standings, remained scoreless. The Briton paid this morning’s mistake that led to his Qualifying crash and retired, despite the team’s efforts to rebuild his car. The Frenchman retired as well after making a mistake in the early stages of the race.
The second race will start tomorrow at 12:00 with Dušan Borković and Kajaia sharing the front row of the top-ten reverse grid; live streaming at www.tcr-series.comand www.tcr-series.tv.

Key facts
Grid – both Files’ and Teddy Clairet’s cars have been repaired following their crashes in Qualifying
Warm up lap – Sutton’s car doesn’t start and is towed back to the pit lane
Start – Magnus and Urrutia sprint ahead of the rest of the field; Potty makes a bad start and drops from third to seventh behind Comte, Briché, J. Clairet and Homola; Sutton starts from the pit lane
Lap 1 – Comte and Briché cut the chicane, the latter slows down and pits; Kangas and T. Clairet come together and crash
Lap 2 – the safety car is deployed
Lap 3 – Briché rejoins, having lost two laps in the pits
Lap 4 – at the restart, Magnus leads from Urrutia, Comte and J. Clairet; Potty overtakes Homola for fifth; Files retires
Lap 5 – Urrutia tries to overtake Magnus at the Source, but outbrakes himself and turns wide; Kajaia overtakes Homola for sixth after they swapped paints
Lap 6 – Paulsen overtakes Coronel for ninth and then Engstler for eighth; Morbidelli overtakes Coronel for tenth
Lap 7 – Coronel and Morbidelli clash at the Source; Coronel moves up to tenth and Lloyd to 11th; Potty overtakes J. Clairet for fourth; Briché returns to the pits
Lap 8 – Homola and Paulsen make contacts while fighting for seventh
Lap 9 – Potty overtakes Comte to finish third behind Magnus and Urrutia; Al-Khelaifi and Wadoux collide and the French girl’s Peugeot rolls onto the gravel and stops upside down