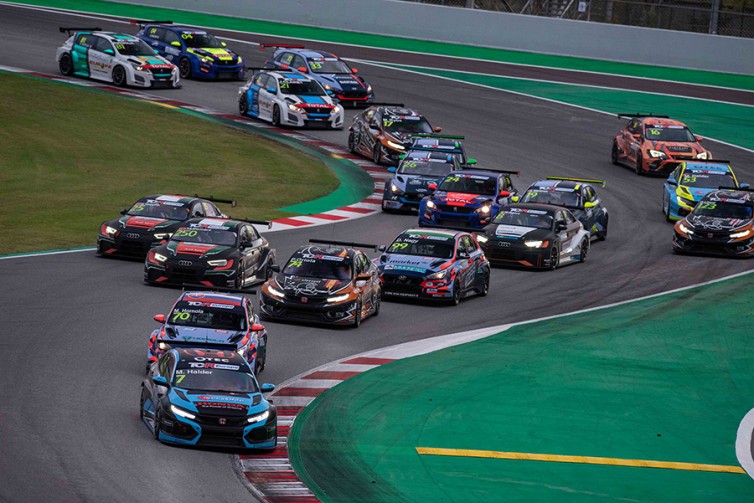 Two years after his maiden TCR Europe victory, in what was then a one-off appearance, Mike Halder repeated his 2018 Barcelona win and dominated the first race of the weekend.
The German driver and his Honda Civic Type-R sprinted away from P2 on the grid ahead of pole sitter Mat’o Homola and built a sizeable lead, leaving the Slovak and his Hyundai to try and defend second position. Despite all his efforts, Homola was not able to keep Pepe Oriola behind, as the Catalan driver passed him during the first lap.
Also on lap 1, Martin Ryba retired following an incident with Teddy Clairet who was later penalised, while during the following lap Target Competition teammates Jessica Bäckman and José Manuel Sapag collided and went off at Turn 10.
Behind the three leaders, Sami Taoufik was quickly moving up the order; the young Moroccan passed Nicolas Baert for P5 and then his other teammate Mehdi Bennani for P3. Julien Briché recovered to P7 after starting from P13, while Championship leader Daniel Lloyd was running in 11th position.
Taoufik overtook Homola for third on lap 6 and began to close the gap on Oriola, while Baert continued to drop back as he got passed by Dániel Nagy, Andreas Bäckman, John Filippi and Briché.
The last two laps provided more thrills as Lloyd locked up his front wheels and ran wide, dropping from 11thto 16th and out of the points; but the focus was on the fight for P2 between Oriola and Taoufik. Just as he had done in Monza two weeks ago, when he rejected Briché’s repeated assaults to win the second race, the Spaniard put in another great defensive performance and beat Taoufik to the chequered flag by two tenths of a second.
Halder’s victory and Lloyd’s failure to score mean that the German driver is now only two points behind his British rival in the standings, while Baert and Bennani are third and fourth with gaps of 17 and 18 points respectively.
Race 2 is scheduled to start tomorrow at 13:55 CEST; live streaming is at www.tcr-series.com.