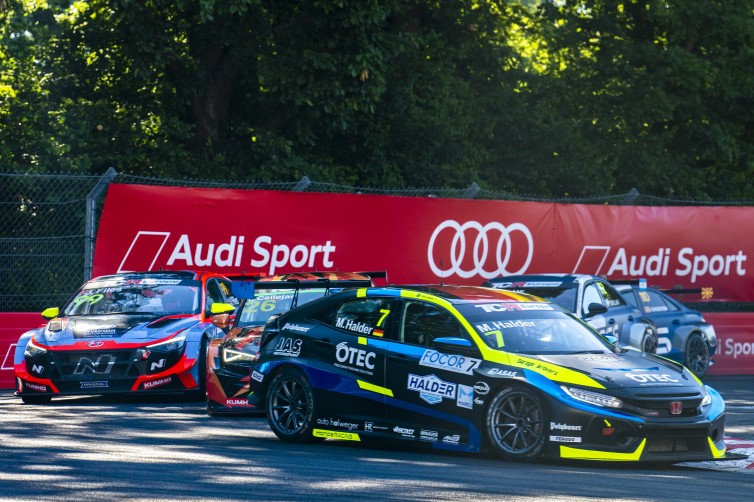 Mike Halder became the seventh race winner from the seven TCR Europe races held so far this season when he took a lights-to-flag victory in Race 1 at the Norisring. His winning margin over the Target Competition Hyundai Elantra N of Josh Files was less than half a second, with third placed Franco Girolami another six-tenths behind, such was the close racing at the season’s only street circuit.

At the start, there was contact between Felice Jelmini’s Hyundai and pole-sitter Halder as the pair headed through the slight right-hand Turn 1. Despite the fact that Jelmini had nosed ahead of Halder to take the lead, he then appeared to miss his braking point for the Turn 2 hairpin and so ran wide, dropping out of the top ten places. The same corner saw contact between the Hyundai Elantra cars of Nicola Baldan and Pepe Oriola, with the Spaniard’s car left stranded on the kerb. There was then another contact between the CUPRA of Evgenii Leonov and Marco Butti’s Audi coming out of the chicane at Turns 3 and 4 and with three cars now needing recovery, the Safety Car was called into action.

Racing eventually resumed on Lap 11 and Halder was immediately under pressure from Josh Files, who was now in second place thanks to his teammate Jelmini’s error. Viktor Davidovski’s Comtoyou Racing Audi RS 3 LMS TCR was third ahead of the Volcano Motorsport CUPRA of Isidro Callejas. Other drivers who’d gained places on the chaotic opening lap included Franco Girolami, who’d moved from P8 on the grid to lie in fifth place behind Callejas, and Stian Paulsen who was now eighth after starting from P16. Immediately after the restart, however, Callejas and Girolami both passed Davidovski for P3 and P4 respectively.

On Lap 13, Callejas passed Files for second place and then Girolami began attacking Files on the next lap. That signalled the start of a furious series of battles for the podium places that would last for the remaining 12 laps. On Lap 16, Callejas attacked Halder at Turn 2, but ran wide and briefly allowed Files through into P2 before Callejas retook the position shortly afterwards. Lap 18 then saw contact between Girolami and Files while the pair were battling for P3 but the English driver held the position.

Lap 22 finally saw a breakthrough in the fight for the podium places when Files passed Callejas for second place at the final corner. That move was followed on the next lap by both Girolami and Davidovski passing Callejas for P3 and P4. By now, Jelmini had climbed back into the top ten after his early indiscretion and he passed Jack Young for P9 on the same lap.

The final few laps then saw more determined attempts by both Josh Files and Franco Girolami to claim an extra place, but Mike Halder held his nerve and continued the brilliant defensive drive that had begun within seconds of the start. He held off Files to take the victory at his, and the team’s, home event by 0.47 seconds, with Girolami finishing third and so extending his lead in the Drivers’ championship. Davidovski was fourth ahead of Callejas and Mat’o Homola, with the Macedonian driver again taking the honours in the Diamond Trophy. Marco Butti’s retirement on the opening lap meant there were no finishers in the Rookie class.

Race 2 is scheduled to start at 17.00CEST on Sunday and will be streamed live via the TCR Portal, on TCR TV and the TCR Europe series’ social media platforms.