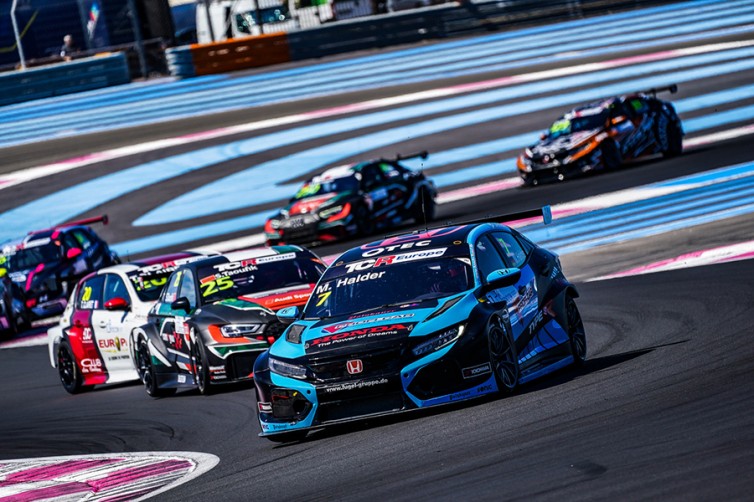 Two years after taking his maiden TCR Europe victory at Barcelona, Mike Halder returned to the top step of the podium as he won the second race of the season opening event at Circuit Paul Ricard.
Halder led from lights to flag and managed to keep guest star Néstor Girolami at a safe distance, leading a Honda 1-2 under the chequered flag. Behind them, Teddy Clairet conquered a well-deserved third place at the end of a stubbornly defensive race in which he rejected all the assaults from Andreas Bäckman and Mehdi Bennani.
Halder made good use of the pole on the reversed grid and led from Sami Taoufik and Teddy Clairet. In lap 1, Girolami overtook Andreas Bäckman for P4.
At the end of lap 2, Jimmy Clairet and Tom Coronel rejoined after a visit to the pits; Jimmy pitted at the end of a warm-up lap with a suspected driveshaft issue, while Coronel’s car was quickly repaired after a contact with Pepe Oriola at the start.
Girolami was putting the pressure on Taoufik; however, the young Moroccan was given a drive through for jumping the start and dropped at the back of the field.
There was a furious battle for P3 between Teddy Clairet, the Bäckmans and Bennani; the latter passed Jessica for P5 in lap 3. This quartet was soon joined by Julien Briché, Daniel Lloyd and John Filippi who added spice to the battle.
In lap 6, Briché went straight at the chicane, his car damaged after a contact with Jessica; soon the French’s pace faded, and he dropped several places. He was later given a five-second time penalty for multiple track limit infringements.
Girolami tried to close the gap to Halder, but the German managed to keep his leading margin around two seconds until the end. Teddy Clairet was able to defend the second place from Andreas Bäckman and Bennani, while Lloyd and Filippi passed Jessica in lap 8, to finish sixth and seventh.
Yesterday’s winner Lloyd retained the leadership in the standings, just one point clear of Bennani, while Girolami moved into P3 on his one-off appearance in the series. Teddy Clairet and Filippi are currently placed fourth and fifth with gaps of 7 and 11 points.
TCR Europe will resume at Zolder for rounds 3 and 4, on September 11/13.