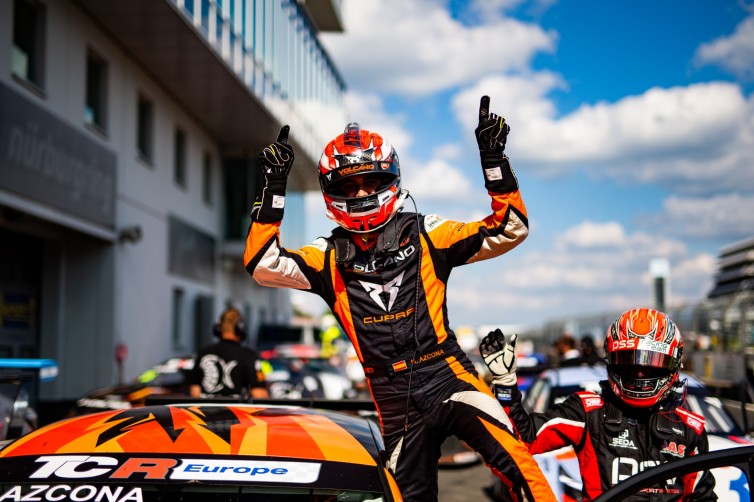 Mikel Azcona grabs his fourth win of the season

Mikel Azcona, driving a Volcano Motorsport CUPRA Leon Competición, took a huge step towards winning the 2021 TCR Europe title by taking his fourth victory of the season in Race 1 at the Nürburgring. A disappointed Franco Girolami finished second after the PSS Racing Honda Civic had led the race until the final lap, with Niels Langeveld completing the podium in the Sébastien Loeb Racing Hyundai Elantra N.

Pole-sitter Isidro Callejas was beaten to Turn 1 by Girolami, who’d started from second on the grid, with Langeveld also moving up alongside Callejas. Azcona started from P5 but quickly moved past Callejas and Langeveld to lie in second place behind Girolami, beginning an epic battle between the pair that would rage throughout the remainder of the eleven-lap race. The Peugeot 308 of Teddy Clairet also passed Callejas on the opening lap, with the French driver destined to spend the rest of the race in fourth place and watching the battle for the podium places raging ahead of him.

There were a number of battles going on further down the order, with Sami Taoufik passing Nicolas Baert for tenth place on Lap 2 and the Hyundai i30 N of Mat’o Homola then also passing Baert’s Audi for eleventh. Taoufik then passed Jáchym Galáš for ninth place on the following lap, while Homola also found his way past his Janik Motorsport teammate to move up to tenth on Lap 4.

There were further changes just outside the top ten, with the two Hyundai Elantra N cars of Mehdi Bennani and Felice Jelmini passing Baert for twelfth and thirteenth places going into Turn 1 at the start of Lap 5. On the same lap, Azcona began attacking Girolami for the lead in a thrilling battle that would continue until the chequered flag.

On Lap 8, Azcona just nosed ahead of Girolami going into Turn 1, but the Honda driver kept his nerve and held onto the lead. Azcona tried exactly the same move at the same place one lap later, but despite a slight contact Girolami was ready for him and again kept the lead. Going across the start/finish line at the start of Lap 10, there was another slight contact between the pair but Azcona wisely backed off, aware that Langeveld had closed right up on the scrap and stood to benefit from any issues affecting the leading duo.

Then, on the final lap, Azcona changed his tactic. He attacked Girolami around the outside of the complex at Turn 3 and grabbed the lead going up the inside of the Argentinian driver into the right-hander at Turn 4. There was barely a gap, but it was all Azcona needed and the Spaniard then held Girolami at bay to record his fourth win of the season – his third successive race victory after the pair of wins at Spa five weeks ago. Langeveld finished third, ahead of Teddy Clairet and Tom Coronel, with Callejas eventually finishing seventh.

The result means Azcona extends his lead over Girolami in the Drivers’ series to 32 points, with Langeveld now in third place, 9 points ahead of Bennani but 43 behind Girolami.

Race 2 is scheduled to start at 12.50 CEST on Sunday and will be streamed live via TCR TV, the series’ social media platforms and on the TCR Australia and TCR UK Facebook pages.