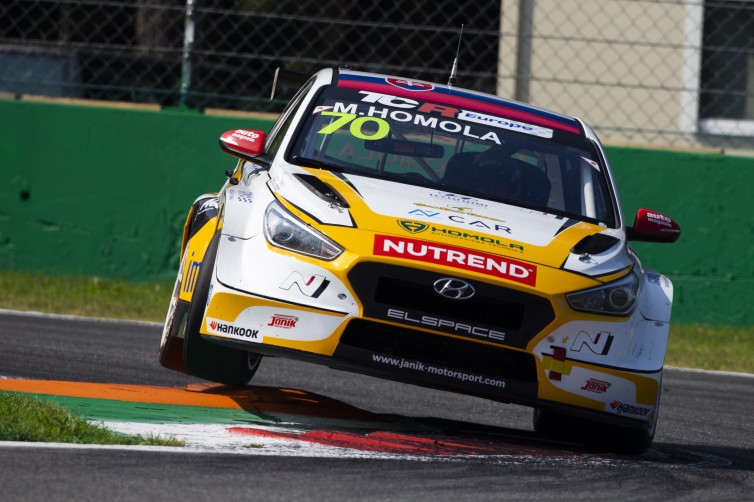 The Janik Motorsport Hyundai i30 N of Mat’o Homola set the fastest time in the second Free Practice session at Monza, with the Slovakian driver finishing the half-hour session just 0.137 ahead of Franco Girolami in a PSS Racing Team Honda Civic Type-R. After the session, Homola was quick to credit a tow from one of the Team Clairet Sport Peugeot 308 cars as one of the main reasons for his fastest lap.

Among the first drivers to set competitive lap times were Jack Young (1:58.140), Felice Jelmini (1:59.123) and Homola (1:58.748), Jelmini then improved his best time, although a 1:58.800 meant he remained in P3 while Girolami went P4 with a 1:59.306. The session was then interrupted when the Peugeot of Gustav Birch went off at the first chicane. Initially, there were yellow flags just in Sector 1, but a Full Course Yellow soon followed which put paid to any thoughts of quick laps.

After around five minutes, Birch’s car had been recovered and so the session went green once again. Sami Taoufik went second quickest (1:58.641) on his seventh lap, but the young Moroccan was almost immediately bettered by Evgenii Leonov (1:58.419). Things then remained fairly static until, with around four minutes of the session remaining, Jimmy Clairet set a time of 1:58.787 to climb into the top five, only for Homola to go quicker with a 1:58.748. Girolami was now in P6 with a best lap of 1:58.620.

Mat’o Homola (fastest): “We had some problems in FP1, but the pace was quite okay. In FP2 it might have looked perfect but I must admit that I had two full laps of slipstream from the Clairets in the Peugeots – really, really good slipstreams – and they took me from the slow speeds on the straights that we have in the i30 which we struggle with. That helped us a lot on the straights, but in the technical parts the car is working well; I have good balance. Keeping my feet on the ground, without the tow I wouldn’t be where I am. The team could really do with a good result here; with the older car we are struggling a lot, especially with the straight-line speed. We have been looking for a perfect setup with the Hankooks that suits me and so we are a little on the back foot with the speed. For the whole season, we have been struggling but since Spa, where I was P3 in Qualifying and really good in the race, especially in the wet, we have been quite okay. We just need to prove it in Qualifying and in the races and so we need a good result for all the team.”

Qualifying is scheduled to start at 09.00 CEST tomorrow, with Race 1 at 13.05. Live timing will be available via the TCR Portal tcr-series.tv and Race 1 will be streamed live on the TCR Portal and the TCR Europe social media channels