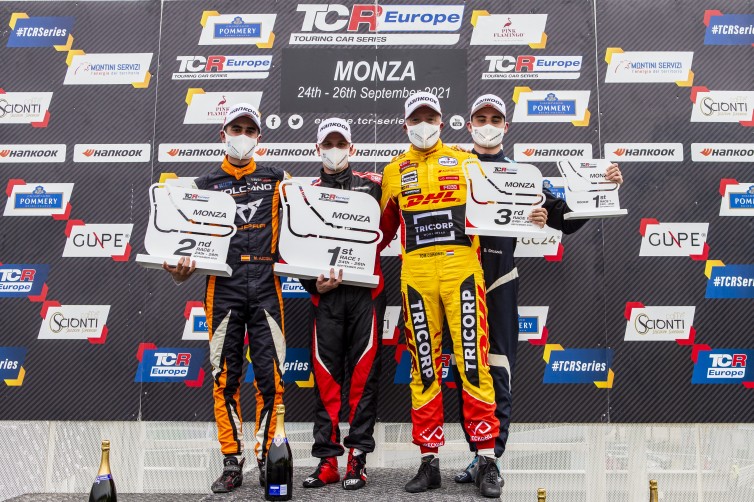 Monza Race 1: Quotes from the podium

Franco Girolami (1st) “I’m really, really happy for team PSS! We delivered a fantastic show, even with the 60 kilos of Compensation Weight. The final lap was very close with Mikel. I tried to fight to keep him back and be clever. Yes, we had a little touch, but I think it’s part of the race. I made a mistake during the penultimate lap, as I saw Azcona’s car in the mirror closing the gap quickly. I tried to push, but it was too much so I went wide, and this helped him to catch me up. I don’t know if there was some engine issue in my car of it was just the weight difference, but he was able to close gap very quickly recovering 600 metres in the last two laps. I tried my best to defend my position. It is true that we had some contact, but it was fair enough.”

Mikel Azcona (2nd): “I tried everything to win, but it was not possible. I made a small mistake earlier in the race when I went straight in the second chicane while fighting with Coronel and Borković. I lost some positions and said to myself: relax Mikel and stay calm. Then I was chasing Tom and chose the right time and place to pass him. From that moment on I had a podium place, but I thought I could try to improve and finishing second or maybe winning. After that Jelmini stopped with a puncture and I saw that Franco was struggling, so I thought it was possible to catch him. During the last lap we touched. I understand his position, he wanted to win for the championship, but we had some contact on the straight line that was too much for me. Usually this is not a problem, like in the last corner, because this is Touring Car racing. But on the straight it’s dangerous and I think we should respect each other. In any case I have to congratulate him.”

Tom Coronel (3rd): “My start wasn’t brilliant and in the first chicane I had some small contacts. After that I had a fight with my teammate Borković and had to work hard to overtake him because he was driving like crazy, but it’s ok, it was fun. Then I saw Mikel behind me, we had a little fight in the corners, but I saw he had much more speed than me and let him pass. In the final laps I saw the two guys in front of me fighting. It like having a VIP seat for a show! They delivered a mega-cool racing! I imagined the people watching on TV going crazy, but I had the best view. I saw them touching and pushing and wished for a flat tyre of something else… Come on boys, I cried, be even more aggressive! And I hoped until the last corner when they touched again. But eventually they deserved it, because I enjoyed watching two championship contenders fighting the way they did, and I did the best that was possible to do with the Audi today.”