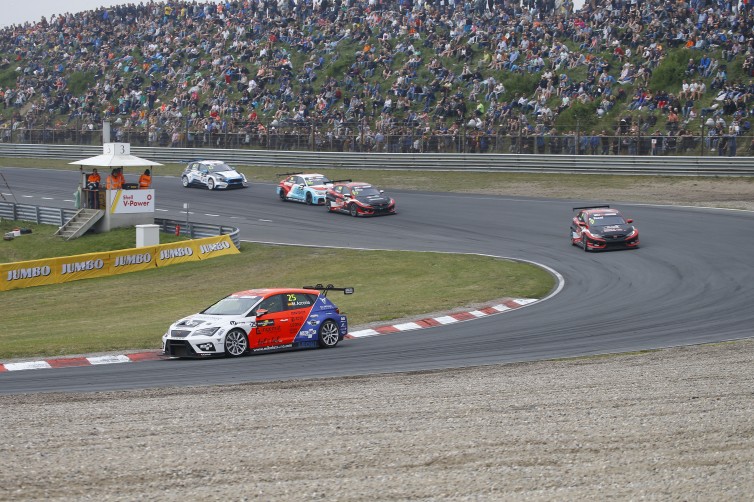 A lot has happened since TCR Europe last visited Zandvoort in the Netherlands. The iconic circuit, nestling in the sand dunes that overlook the North Sea, has been revamped over the last eighteen months or so, with banking added at the ‘Tarzan’ corner (Turn 1) and the final bend, adding to the track’s reputation as a ‘rollercoaster ride’ and which, in September this year, will mark the return of Formula One to a circuit that regularly used to host the Dutch Grand Prix from the 1950s until 1985.

A little over three years ago in May 2018, the two TCR Europe race victories were recorded by Mikel Azcona (pictured) and Josh Files, both of whom would go on to win the TCR Europe title – Azcona in 2018 and Files the following year. Azcona currently leads the 2021 Drivers’ standings after winning the season’s opening race in Slovakia and recording two other podium finishes, but the Spaniard will be missing from the entry list this weekend as he’ll be competing in the inaugural Pure ETCR event in Vallelunga.

Currently second in the standings, 2020 TCR Europe Champion Mehdi Bennani will be hoping to repeat his victory in Race 2 at the Slovakiaring, while Teddy and Jimmy Clairet will be keen to show that their wins on home soil at Le Castellet three weeks ago were proof that the two Peugeot 308 cars are able to mount a real challenge for this year’s title.

Two Dutch drivers will be hoping that home advantage will work in their favour this weekend, with both Tom Coronel and Niels Langeveld still looking to record their first podium finishes of the season. Several other drivers have already achieved that feat, with Argentina’s Franco Girolami, Nicolas Baert from Belgium, Italy’s Felice Jelmini and Sami Taoufik from Morocco all having finished in the top three.

In addition to Baert and Taoufik, several other young drivers have already shown impressive form, with the two Brutal Fish Racing Honda Civic cars of teenagers Jack Young and Isidro Callejas having recorded top-seven finishes, along with 21-year old Klim Gavrilov (Audi RS 3 LMS). TCR Europe regulars Dušan Borkovič, Martin Ryba and Mat’o Homola are among the other drivers who will be looking for good results in Zandvoort, while Danish 17-year old Gustav Birch will be getting his first taste of the series.

All times are CEST. Both races will be streamed live on the TCR Portal tcr-series.tv and via TCR Europe’s social media channels.