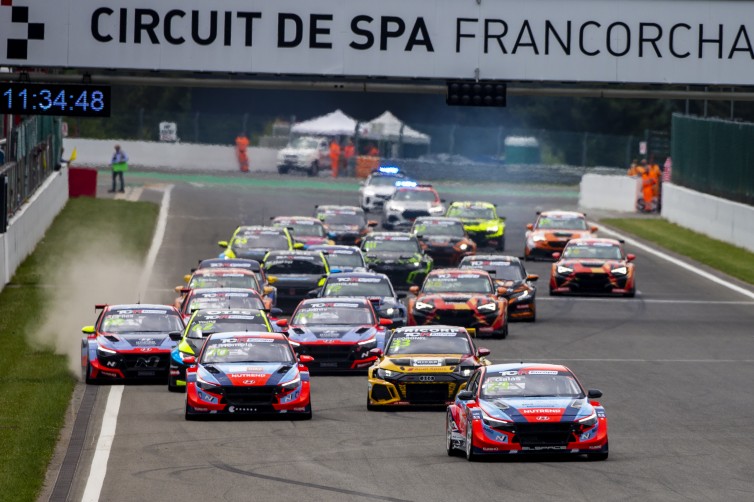 Just two weeks after the previous race weekend at Spa-Francorchamps, the TCR Europe field will tackle the series’ only street circuit at the Norisring in Germany this weekend. The event marks the halfway point of the 2022 TCR Europe championship and sees the series appear on the DTM support bill for the second time this year.

The difference between the series’ longest circuit and its shortest couldn’t be more pronounced. Instead of the sweeping bends and elevation changes of the 7km Spa track in the Ardennes forest, the Norisring is a 2.3km sprint around the city streets of Nuremberg with two long straights and only a handful of corners. The Norisring track might be short, but the event is predicted to attract the largest crowd of the season with well over 100,000 fans expected to attend.

The six races held so far this year have witnessed six different winners, although championship leader Franco Girolami failed to become the season’s first two-time victor when brake fade meant he ran wide on the final lap of Race 1 in Spa and allowed Isidro Callejas to become the series’ youngest-ever race winner. Girolami’s two Comtoyou Racing teammates, Tom Coronel and Viktor Davidovski, have also tasted victory, although with Coronel on WTCR duties for the team this weekend his seat will be filled by Norwegian Stian Paulsen.

The first part of the season very much belonged to the championship’s younger drivers, with 20-year-old Jáchym Galáš taking the honours in Race 2 in Spa ahead of Mat’o Homola in the sister HYUNDAI | Janík Motorsport Hyundai Elantra N and the year’s very first race at Portimão seeing Jack Young, another 20-year-old, winning from his Halder Motorsport teammate Mike Halder.

Among the drivers yet to stand on the top step of the podium are Josh Files, the 2019 TCR Europe Champion, and Pepe Oriola, the reigning TCR South America Champion, who has switched to a Hyundai Elantra N run by Aggressive Team Italia for the remainder of the season after the decision by Brutal Fish Racing to leave the series. Files’ two Target Competition teammates Nicola Baldan and Felice Jelmini and Callejas’ Volcano Motorsport colleague Klim Gavrilov have all recorded podium finishes this season and are hungry for victory while Mike Halder will be keen to repeat his two race victories in the TCR Denmark series last weekend.

Davidovski currently leads the Diamond Trophy class after four maximum-points scores from the six races, with Evgenii Leonov having moved into second place ahead of Giacomo Ghermandi thanks to two class wins at Spa. The RC2 Junior Team will field two cars, for Rubén Fernández and Sergio López while Marco Butti is the sole entrant in the Rookie class in the Élite Motorsport by Comtoyou Audi RS 3.

Apart from Stian Paulsen returning to TCR Europe, there is one entirely new driver entered for the Norisring event. Patrick Sing will drive the same Hyundai i30 N he campaigns in the TCR Germany series, run by his own RaceSing team.

Two things are certain this weekend. With the tight track layout and the unforgiving walls, a strong performance in Qualifying is essential and any errors will be severely punished. The forecast huge crowd is guaranteed two thrilling races.