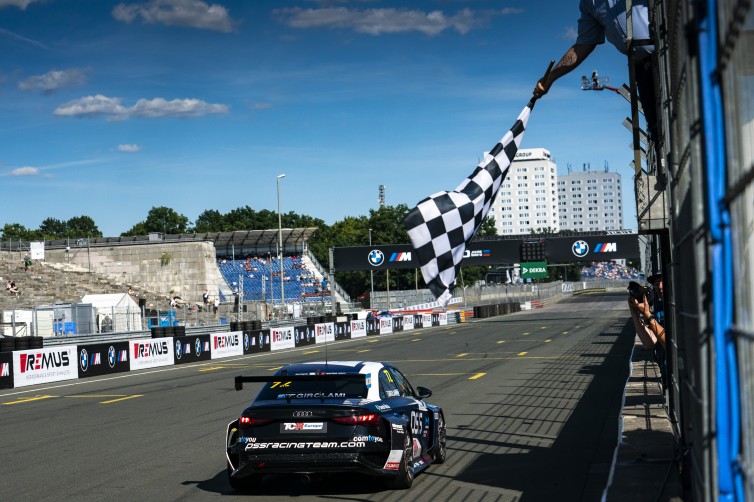 Norisring Race 2: Girolami is the first double winner of the season

At the start, Girolami immediately passed the Halder Motorsport Honda of Jack Young for second place in the sprint down to the Turn 2 hairpin, but there were several incidents as the field negotiated the corner. Josh Files dived up the inside approaching the left-hand bend and made contact with Young’s car, which elevated Files into third place, while Viktor Davidovski made contact with both the Hyundai of Mat’o Homola and John Filippi’s CUPRA, which spun Filippi around. As the cars streamed away towards the chicane, Isidro Callejas was in fourth place behind Files while Young had dropped to sixth. Heading into the last corner, Evgenii Leonov was seemingly tapped into a spin but the Volcano Motorsport CUPRA continued.

On Lap 2, Girolami was starting to attack Gavrilov for the lead, but the Safety Car was deployed when the CUPRA of Giacomo Ghermandi was stranded at the exit to the last corner having apparently made contact with the wall and knocked off a wheel. After moving from P16 to P8 in Race 1, Stian Paulsen had done a similar job in Race 2 and had made it up to ninth place when the Safety Car was called into action.

Racing resumed on Lap 8 and Davidovski immediately passed the Hyundai of Jáchym Galáš for P7 while Felice Jelmini was attacking Callejas for P4. On the next lap, however, Jelmini made contact with the wall at the exit to Turn 2 and the Target Competition Hyundai limped to the next refuge point at the chicane where it pulled up. Lap 10 then saw the lead change hands when Girolami’s pressure finally paid off and the Audi passed Gavrilov’s CUPRA. Both Marco Butti and Rubén Fernández then received drive-through penalties for jump starts.

On Lap 12, Paulsen’s progress up the leaderboard continued when he passed Galáš in the last corner, the Audi making contact with the HYUNDAI | Janík Motorsport Elantra in the process. Three laps later, Davidovski passed Young for P5, while on Lap 16 Mike Halder was one of a number of drivers to benefit when Paulsen tried to dive up the inside at the last corner and appeared to spin, dropping several places as a result and elevating Halder, the winner of Race 1, to P8.

By Lap 18, Girolami had extended his lead to 5.53 seconds but there was now a four-way fight for the remaining podium places, with Gavrilov, Files, Callejas and Davidovski running close together. The next lap then saw contact between Callejas and Files at Turn 2 and Callejas would later receive a black and white flag warning for his driving standards. That didn’t seem to deter the Spaniard, however, and the pair made contact again at the same place on Lap 25.

The final lap then delivered one last change of positions among the leaders when Davidovski finally managed to pass Callejas for fourth place. There were no changes for the drivers in the podium places, however, with Girolami taking a comfortable victory and Gavrilov holding off Files to finish second. Further down the leaderboard, Young finished sixth ahead of his teammate Mike Halder, Pepe Oriola finished twelfth for Aggressive Team Italia after a DNF in Race 1 and Paulsen eventually finished fourteenth. The final Drivers’ point went to TCR Europe debutant Patrick Sing in the RaceSing Hyundai i30 N. Davidovski once again took maximum points in the Diamond Trophy while, after failing to finish Race 1, Marco Butti secured the points in the Rookie class.

In the Drivers’ championship standings, the weekend’s results mean Girolami has now extended his lead to 72 points, with Files, Callejas and Gavrilov all having overtaken Tom Coronel to lie in second, third and fourth places respectively..

Following the series’ summer break, TCR Europe returns to Germany for its next event at the Nürburgring in eight weeks’ time over the weekend of August 27th/28th