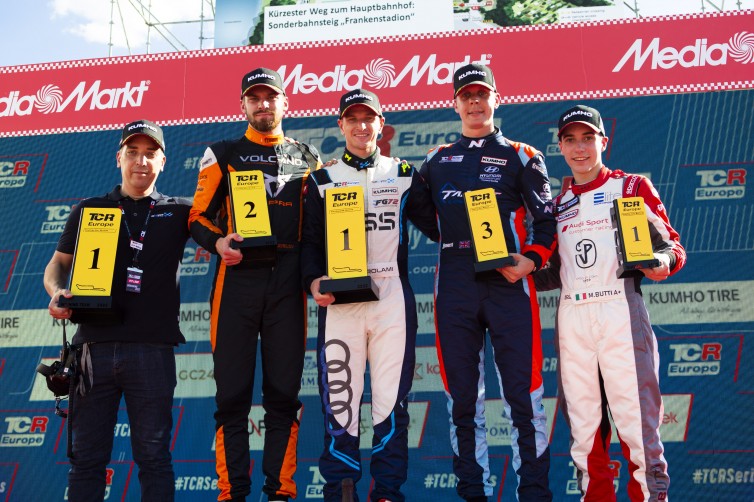 Norisring Race 2: Quotes from the podium

Franco Girolami (1st):“It’s amazing, I have to say congratulation to everyone at Comtoyou Racing, they did an amazing job and gave me an amazing car to drive. The start was great; I could overtake, then was struggling a little bit with Gavrilov. I understand he was too much hard racing with me, but ok I can fight with him and then overtake, so I am happy with a lot of points for the championship. We are in the middle of the year with a great points lead and it is really, really nice. I have a lot of feelings; my story is not so easy. I arrived one year ago here in Europe and we didn’t know if I could race in one, two, three or ten races. Viktor Davidovski trusted me and wanted me to be here, so I can’t believe his trust in me; we need to continue to look forward and complete the job in this way.”

Klim Gavrilov (2nd):“It was really hard, because Files could brake later, and Giriolami could brake later than me but I was doing my best and closing every space to just not give them any opportunity to overtake. Girolami was faster than Files and he could just cross the line on the outside of corner five and overtake me. It was really hard to do this race and finish it in P2. Norisring is great, but I didn’t really enjoy the race as I had troubles with the brakes all the time. I couldn’t brake later and when I tried one time to brake later and I said, no, I'm not trying that anymore, I’m just doing my best and trying to hold everyone behind me.”

Josh Files (3rd):“Today was a good day for me and the team. Again we had an exceptional car, probably the best chassis on the grid, we can brake later than everyone else, we have great traction but the driving standards are crap. The Volcano cars for some reason think they can just change their position in the braking zone every time, so you are nearly having a crash every time – and that’s on them. The CUPRA and the Audi are far too fast. We are missing low down power and as you can see we can’t fight them and they crash into the back of us whenever they fancy it. I’m happy with our performance, but honestly the BoP has to change now as this is just stupid. We’ve been pushing from the start, it’s just that one hand is tied behind our backs. I know the Honda is in the same boat as us, but the VAG cars have too much power, it’s simple.”