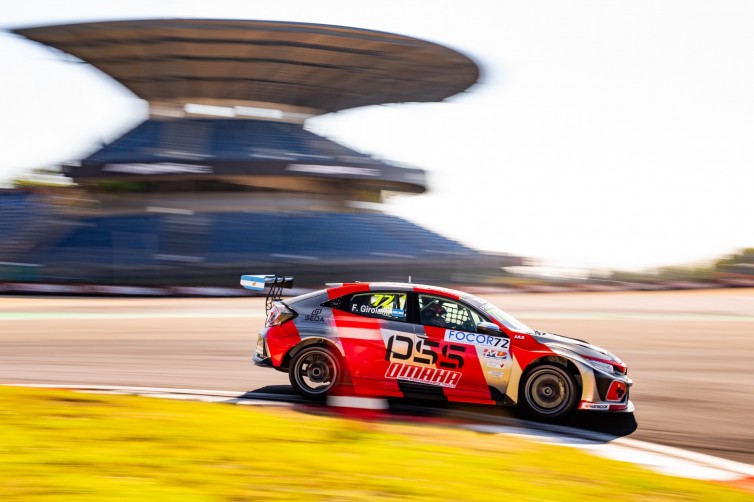 After Mikel Azcona set the fastest time in this morning’s first Free Practice session at the Nürburgring, the Spaniard’s closest championship rival Franco Girolami struck back in FP2. The PSS Racing Honda Civic driver set the quickest time right at the end of the thirty-minute session, with Neils Langeveld – currently in fourth place in the Drivers’ standings – also beating Azcona’s time.

Moments after Girolami’s time appeared on the screens, Azcona improved his fastest time with a lap of 2:07.719 – over nine tenths quicker than Girolami – as though to prove a point. Spanish teenager Isidro Callejas went P4 with a lap of 2:10.241, just over two-tenths ahead of Mat’o Homola (2:10.458) in P5. Both, however, were pipped by Tom Coronel in the Comtoyou Racing Audi RS 3 LMS; the winner of Race 1 in Zandvoort moving up into P4 with a 2:09.612.

The session was suspended for several minutes when the Audi of Łukasz Stolarczyk ended up in the gravel at Turn 10 and had to be recovered. When the session resumed, around seven minutes remained on the clock and there was a scramble to get the cars out on track for a few more laps. Langeveld immediately improved to retake P2 (2:08.265) while Jack Young went P3 with a time of 2:08.464. All three of the Brutal Fish Honda cars had run without working transponders in FP1 and the issue had been solved in time for the second Practice session.

With a little over a minute of the session remaining, Girolami lapped in 2:07.467 to go P1, with Langeveld also improving in the final moments of the session to go second fastest with a time of 2:07.684. Coronel also improved, but his best lap of 2:08.385 wasn’t quite enough to beat Azcona and so the Comtoyou Audi finished the session in P4 ahead of Young’s Brutal Fish Honda.

Franco Girolami (fastest): “I am really happy for everyone at the PSS Team. This was a really, really good show from all the team, the mechanics and the engineers. We prepared the car for this moment; in the first part of FP2 we tried to understand the car for the races and then in the final part we put two new tyres on the car and we could set a Qualifying pace. You never know what will happen in Qualifying or the races; we think Azcona will be faster tomorrow but for sure I will be fighting. I can’t do anything about him, only concentrate on my own work, and I want to improve myself. Anyway, tomorrow is another day!”

Qualifying is scheduled to start at 10.10 CEST tomorrow, with Race 1 at 14.55. Live timing will be available via the TCR Portal tcr-series.tv and both Qualifying and Race 1 will be streamed live on the TCR Portal, the TCR Europe social media channels and the TCR UK and TCR Australia Facebook pages.