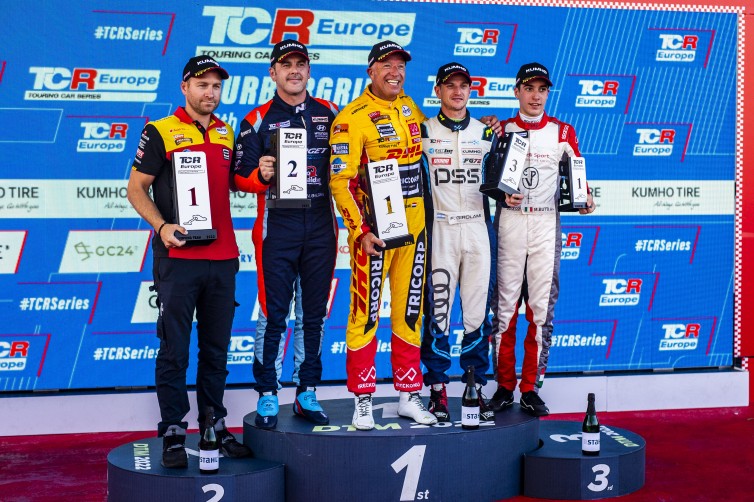 Nürburgring Race 1: Quotes from the Podium

Tom Coronel (1st): “I knew the start was critical and then just the first three laps, as tyres when they’re new are very strong. After that the braking started to get a bit difficult; one time I outbraked myself at the first corner and then again at the chicane, so I decided to be clever and to just keep the gap to about two seconds. In the first practice I had a couple of difficulties with the car, as this is a brand-new car for me, and so I said to the guys we need to change some things, and after that I was quite happy. Now we just have to be clever to try and be second in the championship.It’s a pity we weren’t able to do the second race, but I’ve been too long in motorsport to moan about these kind of things as they’re not in anyone’s control, so I just enjoy life and enjoy racing.”

Nicola Baldan (2nd): “It is a great result for me. I’m just happy about the podium, but particularly after a very tough weekend for me at the previous event at the Norisring, I’m really excited to follow that up with this, also here at the Nürburgring, a circuit I’ve never raced at before. Thanks to all my supporters and to my family – and I’m now really looking forward to my home race next time out at Monza at the end of September.”

Franco Girolami (3rd): “I’m very happy with the result and for the team. We’ve scored a lot of points in the championship in the last part of this year. After the contact with Jack Young in the first corner, my car wasn’t so good, I think something was broken in the rear suspension. But we were able to finish the race and get a good result.The championship is looking good, but we still have four races to go, so we can’t stop and can’t relax just yet.”