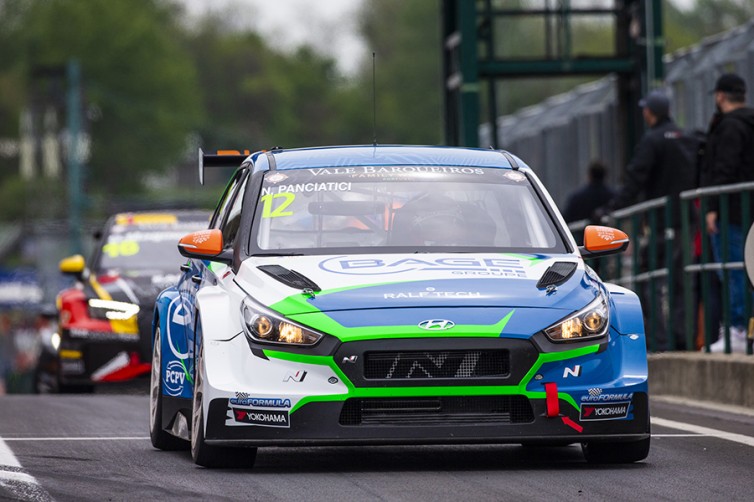 Panciatici leads a Hyundai 1-2-3 in Practice 1

The 2019 TCR Europe Series went underway at the Hungaroring with the first Practice session in which TCR rookie Nelson Panciatici emerged as the fastest driver. The Frenchman led a Hyundai 1-2-3 ahead of Dániel Nagy and Josh Files.
Eventually eight Hyundai i30 N cars placed within the top 11, with only three drivers who were capable of squeezing among them: Gilles Magnus (Audi) fourth, Gianni Morbidelli (Volkswagen) seventh and Aurélien Comte (Peugeot) tenth.
Actually Comte (1:54.281) and Morbidelli (1:54.094) were the first driver to top the timesheet, however, after a brief period of full-course-yellow when Milovan Vesnić’s Honda stopped at T9, Panciatici set the fastest lap for good (1:53.761), Files moved up to second (1:53.846), but was then demoted to third by Nagy (1:53.814).

“It’s always great to start a weekend like that, but it’s only Free Practice and so we still need to work for Qualifying. It looks good for the Hyundai cars as it’s good to be at the front and we will try to build on this. We are not really happy with the car as it has a lot of understeer, so we will have to try and improve, so we still have work that we have to do,” Panciatici said.

Belgian teen-ager Magnus moved up to fourth ahead of an impressive Jessica Bäckman who was improving consistently throughout the session. Mat’o Homola, Morbidelli, Andreas Bäckman, Luca Engstler and Comte rounded off the top ten that were covered by five tenths. Stéphane Lémeret was the best Honda driver in 15th position, Davit Kajaia placed his CUPRA 17th and he was followed by John Filippi’s Renault Mégane in 18th.
The fastest of TCR Central Europe was Czech races Jáchym Galášz in the GT2 Motorsport Volkswagen who ranked 27th.
The second free practice will take place at 13:45.