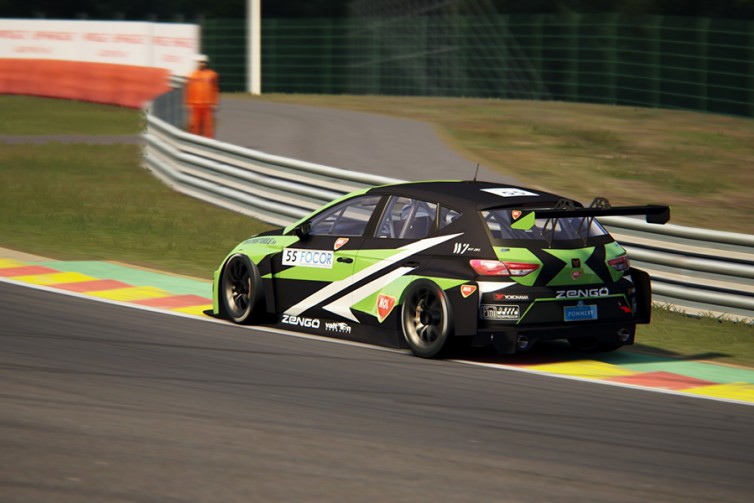 Penalties push Bence Boldizs up to second in the points

The time penalties that were imposed after the two TCR Europe Series SIM races held on Wednesday night helped Zengő Motorsport’s Bence Boldizs to climb from fourth to second in the standings.
The young Hungarian was promoted from sixth to fifth in Race 1 and from 12th to 9th in Race 2, which meant he scored nine further points. Boldizs now lies 40 points behind the leader Dániel Nagy and has a 4-point advantage over Tamás Tenke.
Another driver who took advantage from the penalties was Mikel Azcona, who closed within one point from Tenke, though he lost one place in the standings from third to fourth.

Race 1 – Mat’o Homola was dropped from 5th to 10th by a double 10-second penalty for colliding with Jimmy Clairet and Azcona.
25-second penalties for hitting other cars were inflicted to Andrej Studenić who was demoted from 10th to 14th, Niels Langeveld (from 11th to 16th), Tom Coronel (from 13th to 17th), Jimmy Clairet (from 14th to 18th) and Luca Filippi (from 15th to 19th).
Thanks to these penalties, Nicolas Baert, Lewis Kent and Julien Briché all advanced by four places to 12th, 13th and 14th respectively, while Jessica Bäckman moved up from 20th to 15th.

Race 2 – A 10-second penalty was imposed to Jimmy Clairet for colliding with Nagy, and to Aurélien Comte for making contact with Martin Ryba; the two Frenchmen lost one place each and dropped to 11th and 12th respectively. Ryba received a similar penalty that demoted him from 15th to 17th, while Nicolas Baert was dropped from 14th to 22nd by a 25-second penalty for hitting Kevin Ceccon. Abdulla Al-Khelaifi who was also given a 25-second penalty for an incident with Comte and this dropped the Qatari driver from 9th to 18th.
Among those who benefitted from the penalties were Coronel who advanced from 13th to 11th, Filippi, Studenić and Briché who all entered into the point zone.