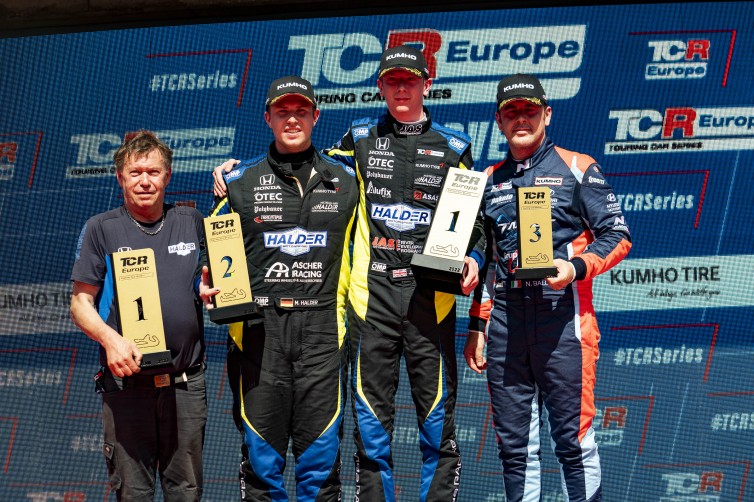 Portimão Race 1: Quotes from the podium

Jack Young (1st): It’s amazing! We’ve been chasing this for a long time for this past year and to do it in the first round in TCR Europe and lead the championship going into Race 2 is an amazing feeling. It’s a brilliant result for the team; a 1–2 in Qualifying and doing it again in the race, you can’t ask for more than that. Regarding the overtake on Mike - to be honest I actually locked up, so it was crash into him or do the move! Luckily it worked and I think it was a bit of team play as well. I managed my lap times after I overtook Mike, made a few small mistakes but after that I got used to the wear of the tyres and brakes and stuff like that, then just pumped in the laps and built a gap. I’m very happy.”

Mike Halder (2nd): “It feels unbelievable! Overall, it was a very bad year last year with our budget for the whole team, but now we come back to TCR Europe and like this it’s unbelievable to be first and second in the first race, and P1 and P2 in the Qualifying too. Jack did a really nice job, so my congratulations to him. He had a really good pace over the distance, I tried to keep with his pace and follow him as best as I could, but at the end of the day a double podium for us as a team is just unbelievable.”

Nicola Baldan (3rd): “I really didn’t expect to be at the front this weekend, to be honest. Today has shown I am in the best team, in the best car. We did a great job over the winter, and this is our reward, so I’m very happy. The target here was just to finish the races, make the most out of them without recording a DNF and pick up some points, now this is the target for tomorrow. It is important to make sure I bring the car home.”