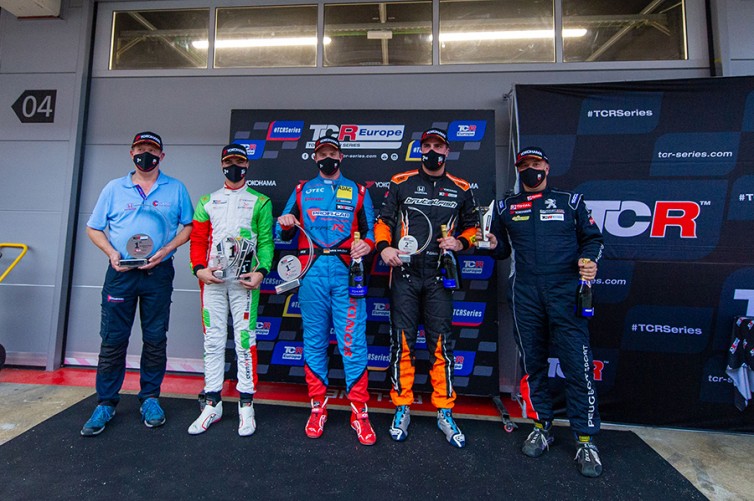 Quotes from the podium finishers in Race 1

Mike Halder (1st): “I made a good start in what were quite difficult conditions, and I managed to have two or three good flying laps at the beginning of the race to build a good gap; after that I could control my pace and the gap between me and Pepe. I’m really proud of the whole team - we only have seven members here to run two cars so it’s a very small team but it’s the best I could possibly have. They gave me a really good car and so I’m very proud of all of them. Today was very good for the Championship and we need to score as many points as possible tomorrow. We can’t afford a repeat of what happened in Monza where we scored two zero-point finishes...”

Pepe Oriola (2nd): “Of course I wanted to win but finishing second is really good. I tried to follow Mike at the start, but it was impossible; he had new tyres and I was on tyres that were slightly used. I also had a really good battle with Sami at the end; the speed of the Audi is crazy, and I was also carrying the weight from Monza so the difference between the cars was massive, but I’m happy. I keep scoring points in the Championship so that keeps my hopes of the title alive. In Monza I was P3 when I was hit. Without that, this would have been the third successive podium for me, so that hurts a little bit. But we are into the second half of the season and nothing is lost. Unfortunately, Daniel didn’t score today but, being selfish, it’s better for me because we all get a little bit closer and the Championship fight is more open.”

Sami Taoufik (3rd): “Ever since the first lap I was a bit nervous because we went to the grid with wet tyres just to make sure it wasn’t a damp race. We got a good start, but I got overtaken by my two teammates before I passed them again after a couple of laps. I knew I had the pace to go even more forward but sadly I got stuck behind Pepe Oriola in third place. In different circumstances I think I could have finished first but I’m happy with what I did. Tomorrow we’ll hope for the best and hopefully aim for the same kind of result or even better. We had a radio problem in Qualifying and I thought they were calling me to the pits in Q2, so I came in one lap too early. They managed to do the setup and the whole session we intended to do so that put us in sixth position. Tomorrow we start from P5, so positive vibes we can do the same as we did today.”