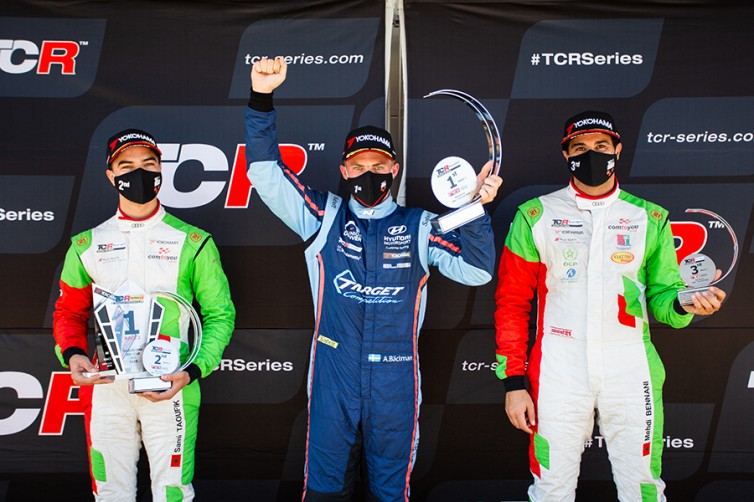 Quotes from the podium finishers in Race 2

Andreas Bäckman (1st): “It was a really tricky race because I was leading for the whole time and I’m not really used to being at the front and leading like that. In the end, the tyres were starting to go off and I was quite scared on the final lap because I thought I might get a puncture or something as this track is very hard on the front tyres. After my accident in Zolder, I was very happy to get back in the car; there isn’t any pain in my wrist anymore when I’m driving. The team had a really difficult first half of the season, so to come back and have this victory was really good for me and for them. It’s sad for Jessica and John because we could have had a 1-2-3, which would have been great for all of us. Barcelona is one of my favourite tracks, so I was looking forward to the weekend as I like the way the circuit flows and the fact that it’s quite technical, particularly in the final sector.”

Sami Taoufik (2nd): “We had a rough start, I think I was down to P7 so I kind of lost hope, but the tyres started to come in and thanks to my teammate Mehdi we started to pull through and overtake positions together. In the last couple of laps, Filippi went into the pits and so I finally managed to pull off the move on Pepe that I couldn’t quite do yesterday, so I got my revenge! Tyre management is a big problem in this type of car, so his plan for the race was very different to my plan and mine looks to have turned out better. I’m sure we’ll have a few more battles between now and the end of the season and hopefully we can both score points.”

Mehdi Bennani (3rd): “I’m really very, very happy for the two podiums that we scored for Audi and Comtoyou. If you asked me to tell you about the hardest podium result I had ever scored, I would say it was this one! With 60kg of ballast, it was like I had a passenger in the car with me and it was even worse in race conditions with older tyres. Sami did a fantastic job and I’m very happy with what we were able to do this weekend and to score so many points, I don’t think we are so bad. We hope we will also achieve a good result in two weeks’ time in Spa, but it’s going to be tricky as the championship battle is so tight so all we can do is hope for the best and see what happens.”