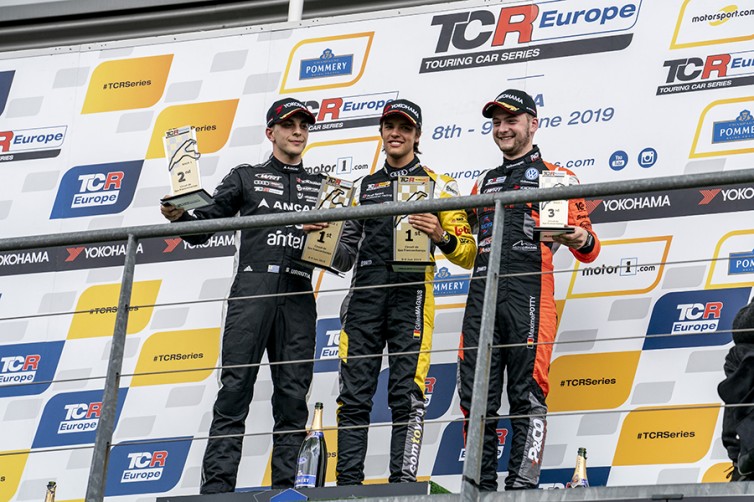 Quotes from the podium finishers in Race 1

Gilles Magnus (winner): “It is absolutely fantastic to win at home, here at Spa, and I am very happy for Comtoyou Racing and the RACB, who have supported me a lot. I am still a rookie with touring cars, but I have worked and trained a lot. At Hockenheim, we were ok, but here we really had a great pace. I trained also on starts, and here my kick-off was very good, so I could take the leads and pull away a little bit, which helped preserving the tyres. Santi (Urrutia) tried to attack me, but I stayed cool and everything went well. Now, we are well-positioned in the championship as well.”

Santiago Urrutia (second): “It’s a good result, and I am happy that after my very bad starts at Hockenheim, it worked better here. I trained a lot at the team’s factory. I had to defend my second position in the first laps but then I was able to focus on reducing the gap from Gilles (Magnus) and I almost caught him. I tried to outbreak him at La Source, but it was a little bit optimistic, and after that, it was over. He had a little bit more speed than me, I couldn’t do more.”

Max Potty (third): “It’s been an exciting race, which ends better than it started. The bad start was entirely my fault, I remained in neutral… I was lucky I could get back to the top without big troubles. The pace was very good and it’s a pity that mistake at the beginning. In the last lap, I managed a daring overtake on the outside at Stavelot, I admit I took a risk, you don’t often try things there! But it went well, also because Comte was very fair.”